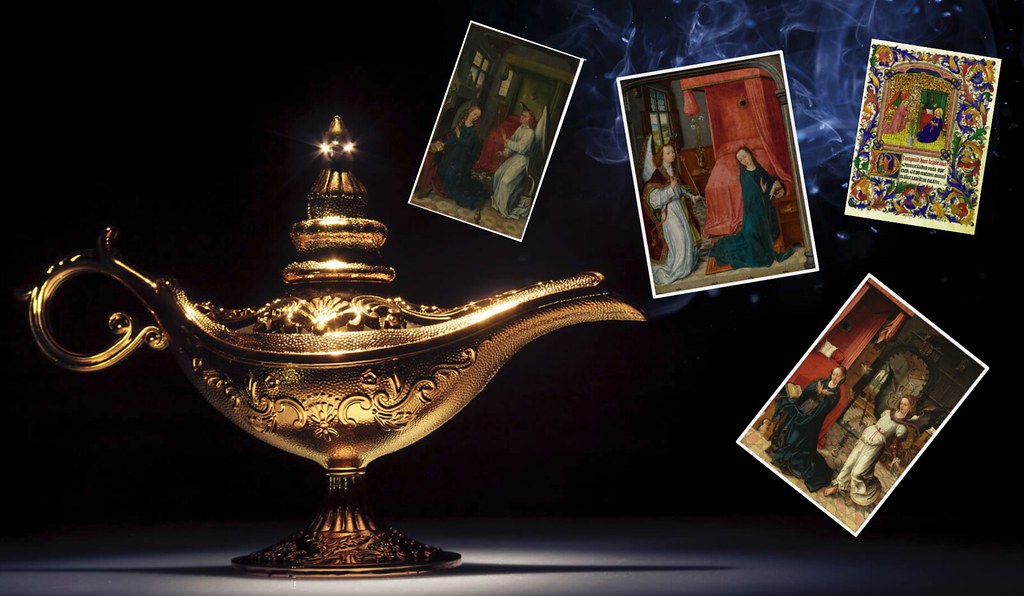 When I was writing my seminal posting about 1001 Virgins and their (non)Mirrors, I of course used this reference to the Arabian night tales rather frivolously, including a total unattainability of this figure. Or so I thought, because after few more years of my loose exploration of this subject I now believe that one day these 1001 Annunciation with the ‘mirrors’ could  be in fact found!

I keep discovering more and more of those.Sometimes I share them in my AMA feed, and later I also shared a few fresh findings in the FB community I wrote about.   It’s time for a quick follow-up of my 1001 list. In fact, I partly has done this already, since in my recent posting about Pieter Coecke van Aelst (Re Annunciation) two of his Annunciations have been already shown. But there are more.

When I was compiling this list, I included only the works of Flemish (plus some Dutch) masters. But I was only showing paiting (mostly oil on wooden panels), perhaps with just one exception, of the leaf by Simon Bening. Since then I found few more illuminations of the Annunciation scene where we also find ‘mirrors’.

One of them is a leaf from the Book of Hours for the use of Rome, attributed to the Master of Golden Foliage from Bruges, c.1440. 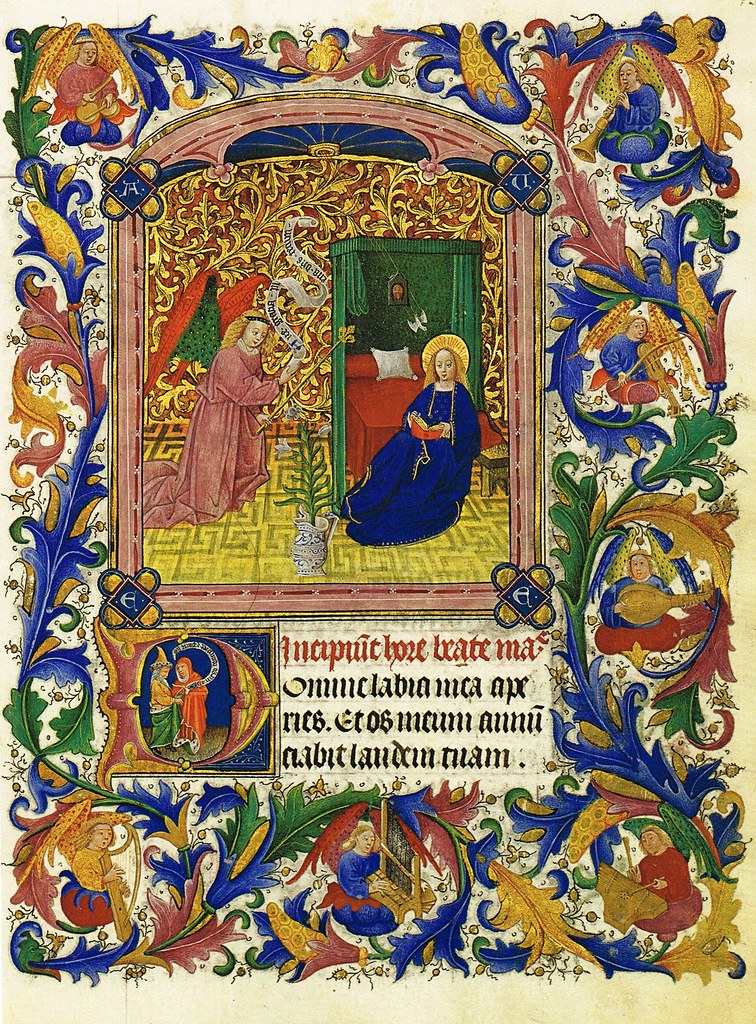 Here we see a classical example of the in-bed icon depicting Christ. 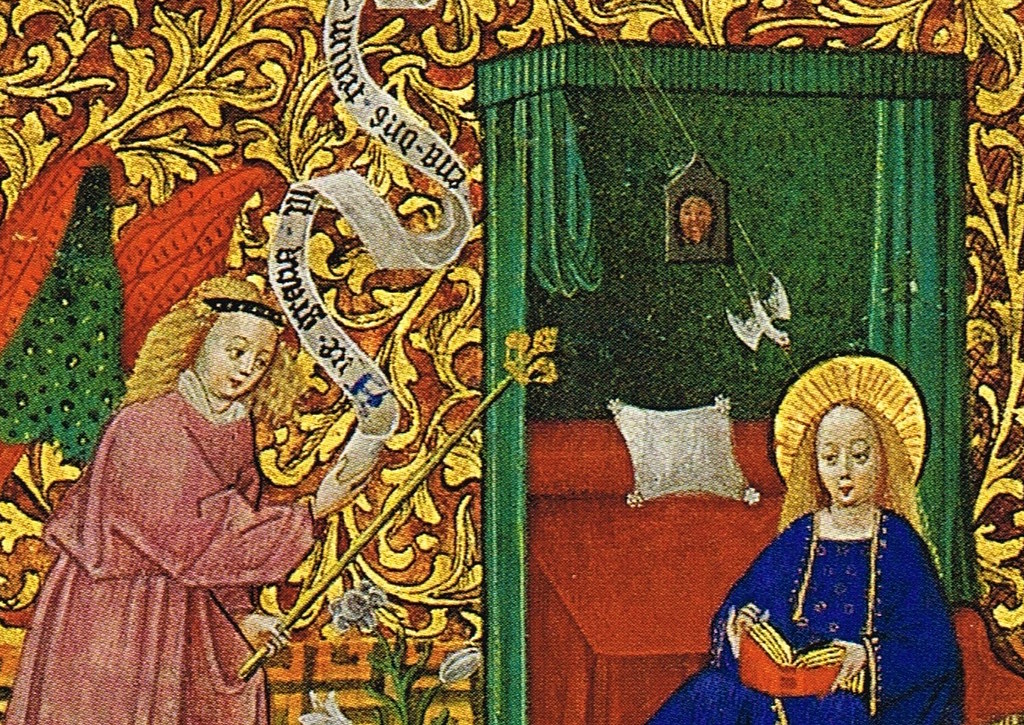 Another example is a leaf from The Hours of Virgin by a master from Utrecht) (c.1430) 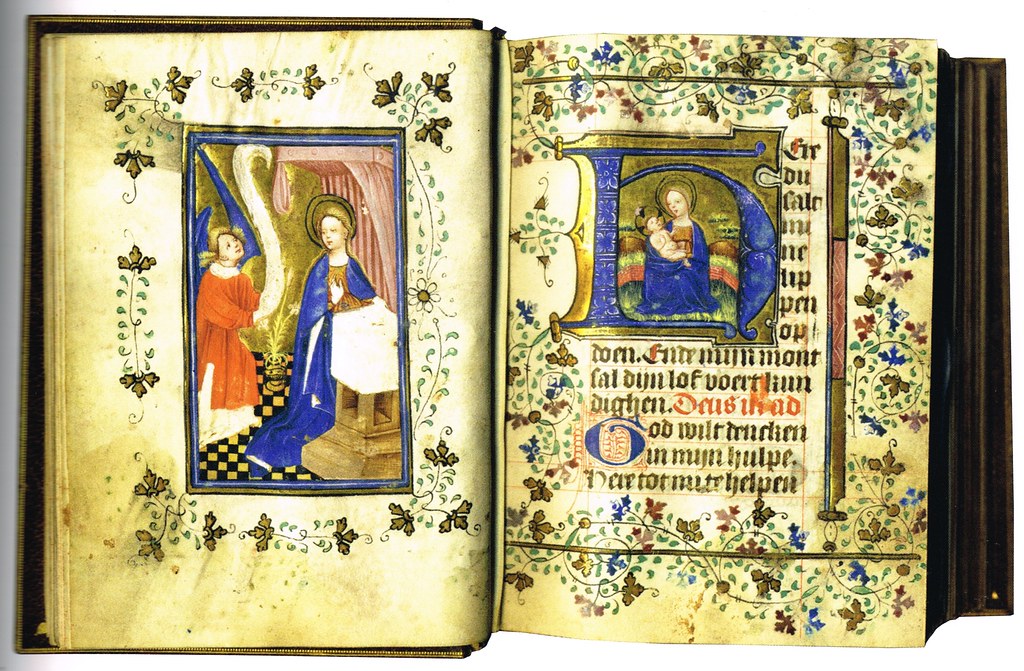 Here we can see only a small fragment of this ‘thing’, and it’s not even possible to say whether it was mirror or a medallion of some sort: 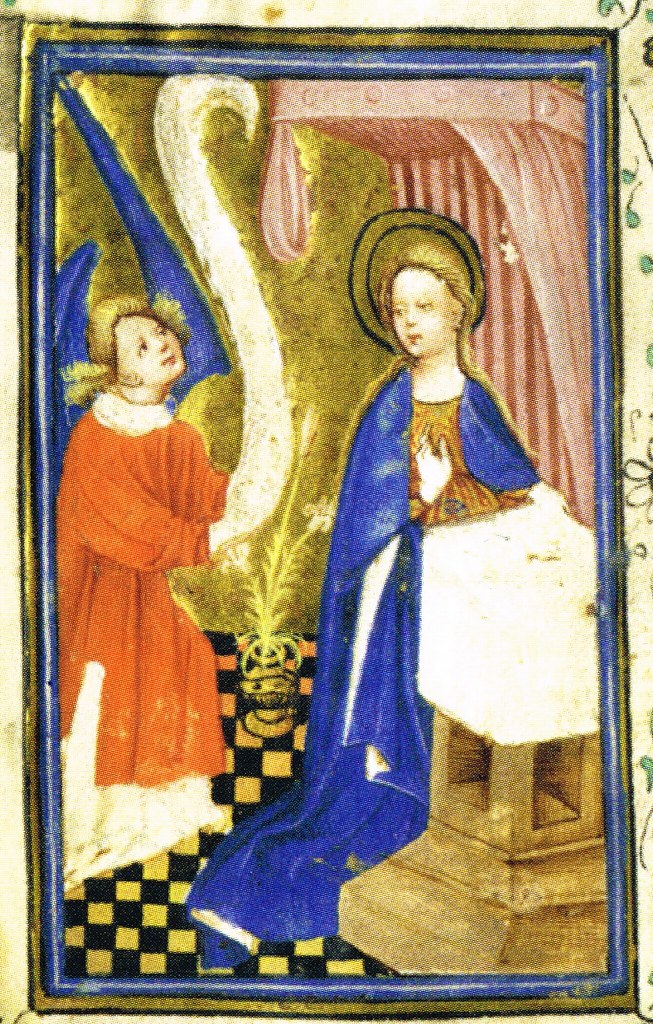 This the leaf with the Annunciation scene from the so-called Hours of Engelbert of Nassau (c. 1470-1490), the codex that is believed to be illuminated by the Master of Mary of Burgundy from Gent. 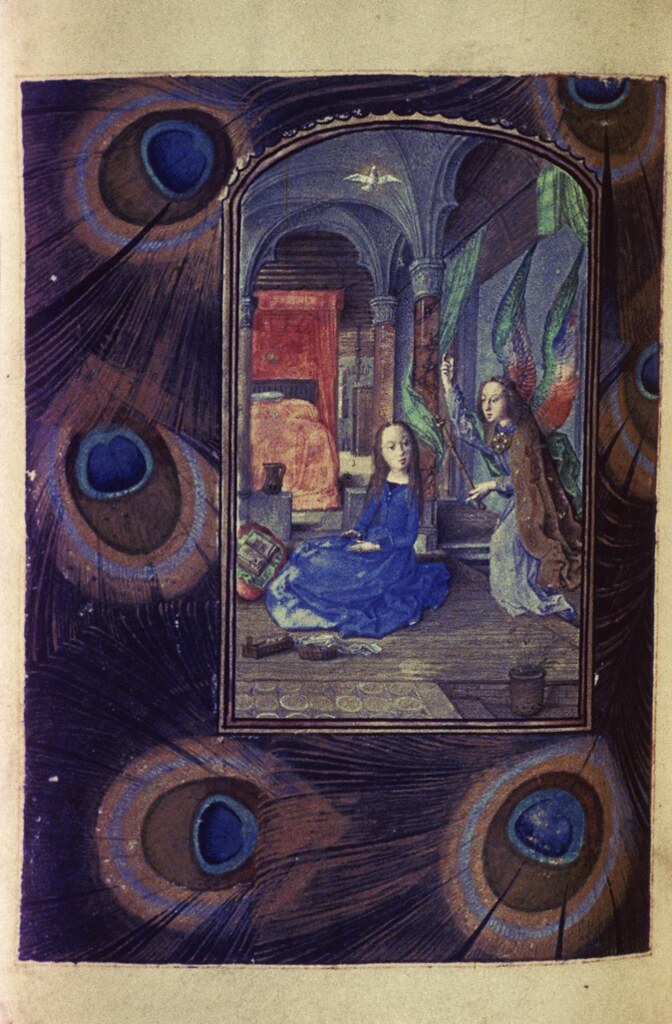 Again, we see only a sign of something mirror-like in the Mary’s bed here: 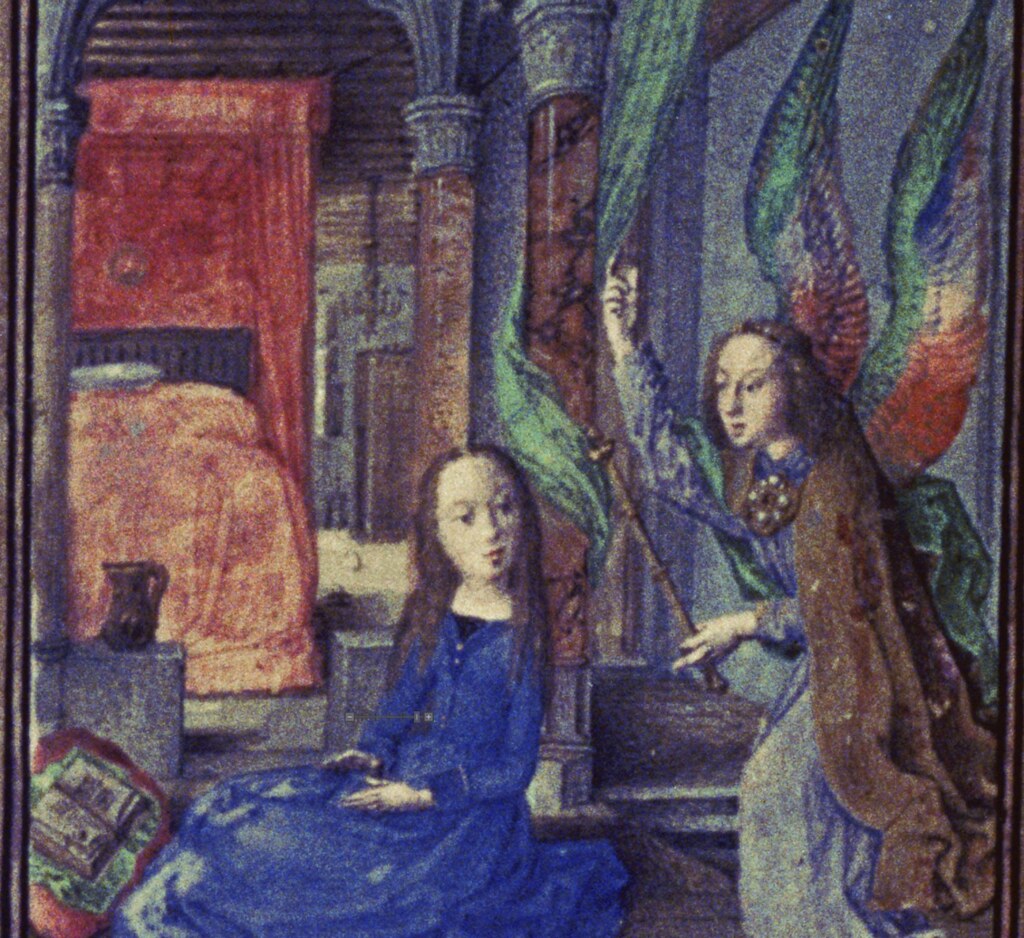 Coming back (or rather ‘forward’) to paintings, I found a really great example of the Annunciation scene attributed to the so called Master of Sopetrán (c.1470) 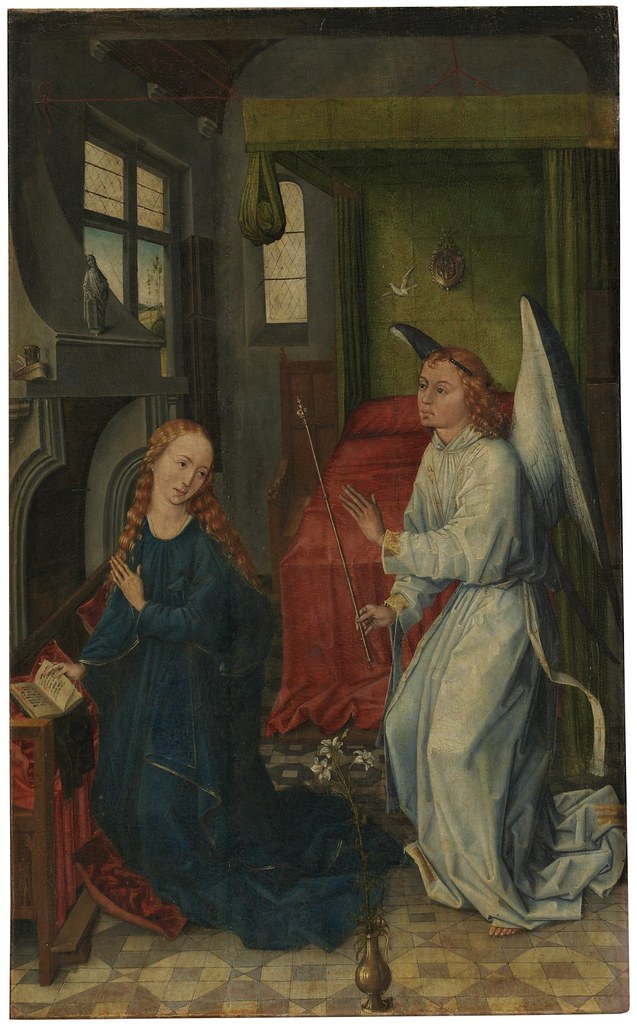 Technically speaking this was a master from Spain (Sopetrán is the name of a monastery in Guadalajara). But his style clearly resembles the Flemish schools of that time, so either studied/worked in one of the Flemish cities, or could be even coming from the Flemish lands, similar to Juan de Flandes.

I have a fairly large copy of this panel, but it’s still difficult to say what is depicted on this medallion. It can be a scene of Coronation of the Virgin, or the Trinity 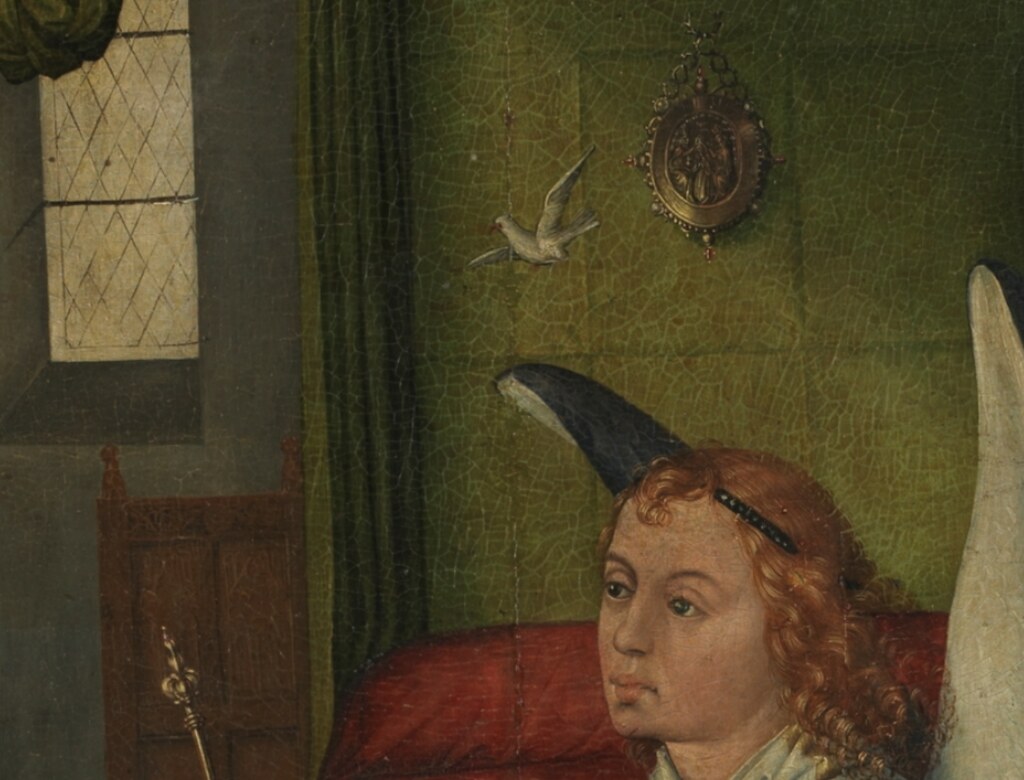 This panel of Annunciation (c. 1470s) is attributed to the circle of Rogier van der Weyden: 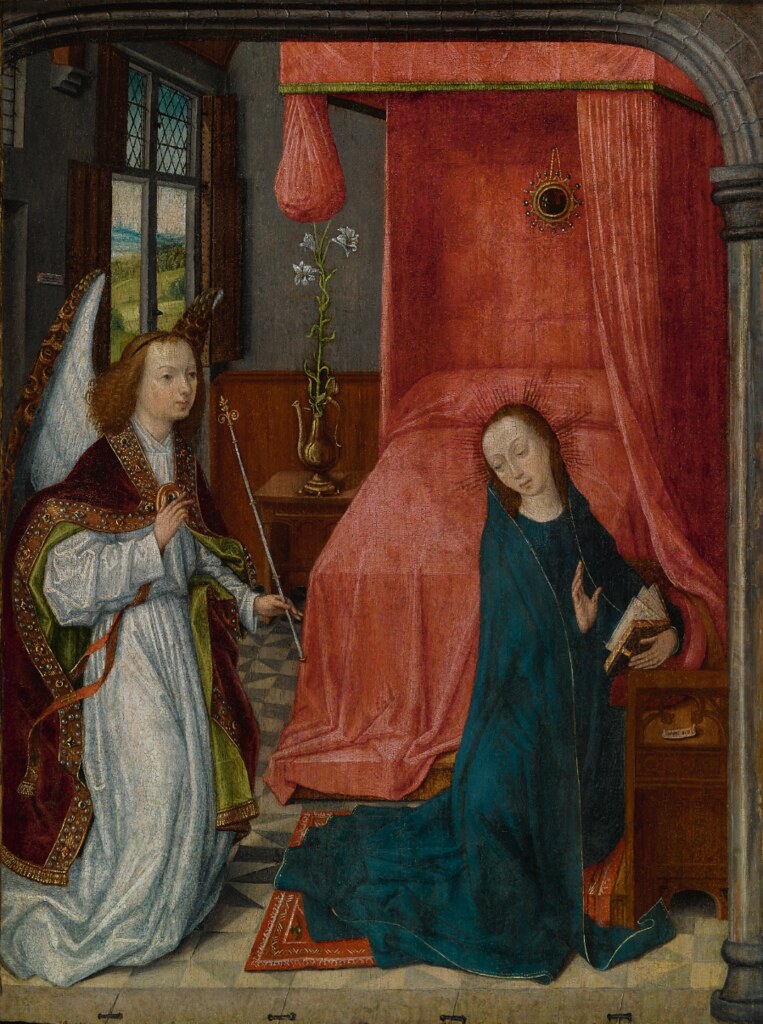 Its close-up of the mirror is one of the largest I have. It even allows to see in its reflection a rolled-up sack with a canopy’s curtain. 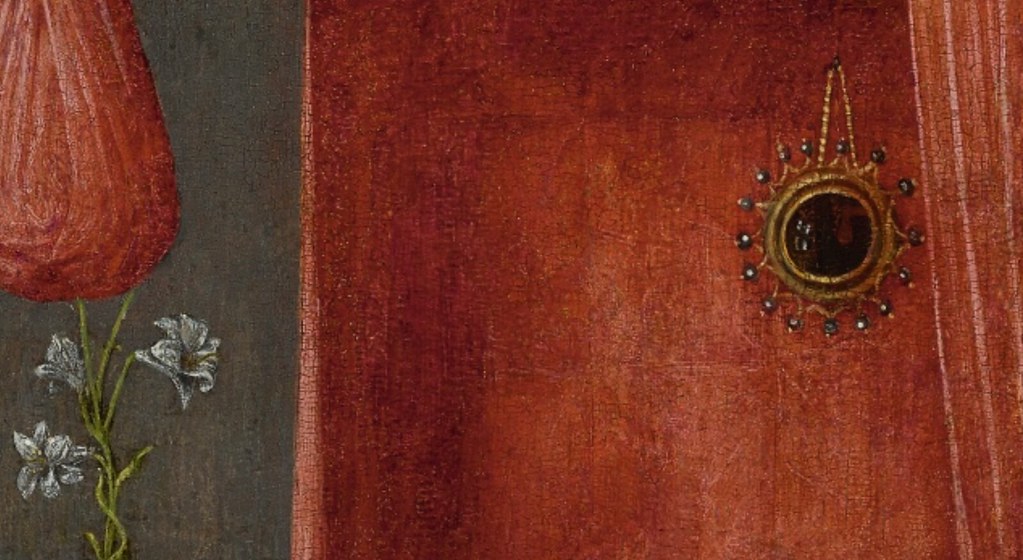 This is another example of the work also attributed to the workshop of Rogier van der Weyden: 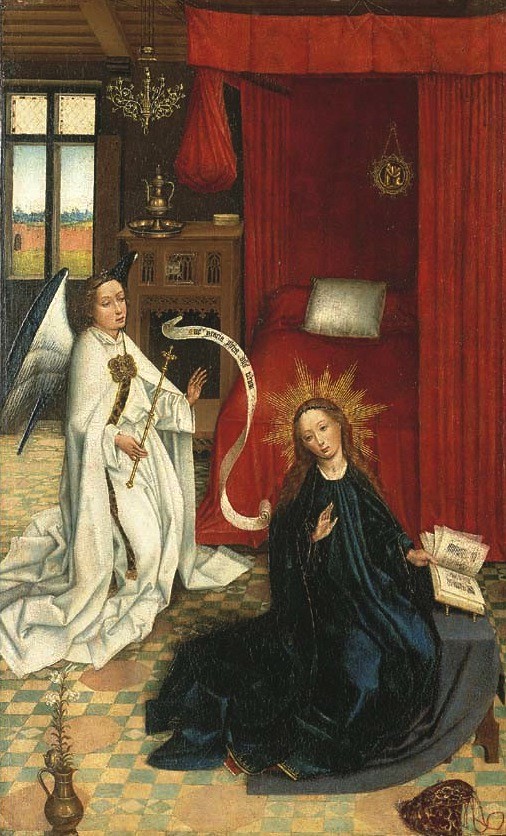 Another prominent example is a later panel (c.1520) that is tentatively attributed to Jan de Beer 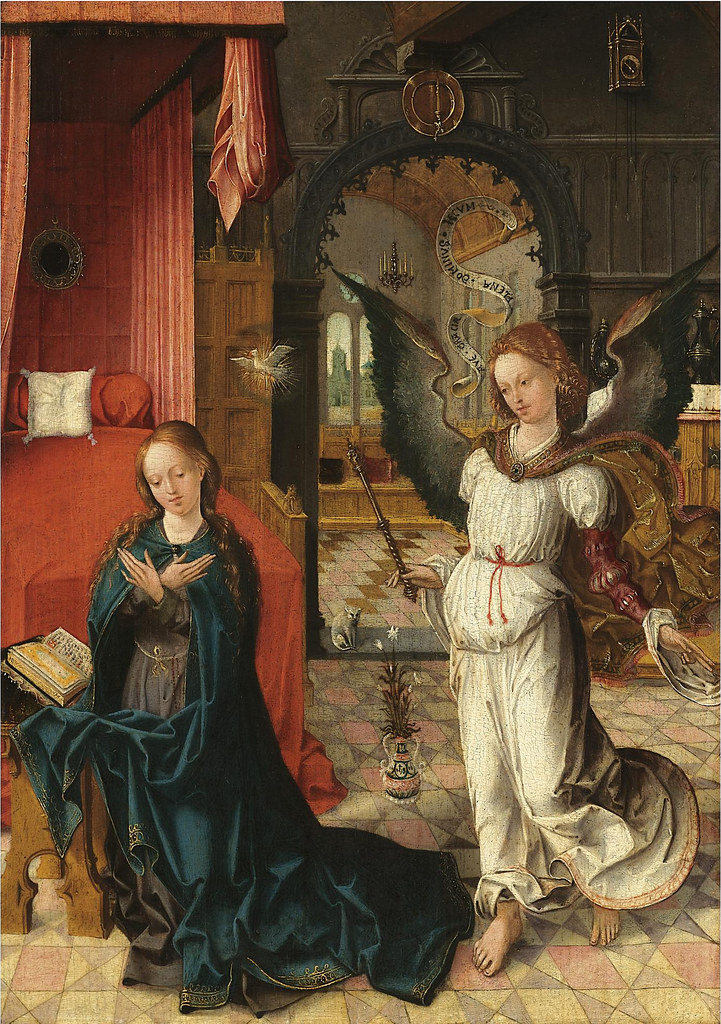 Again the Mary’s bed is equipped with a non-mirror, in a very elaborate frame, that resembles the one of the van Aelst’s Madonna Under Canopy: 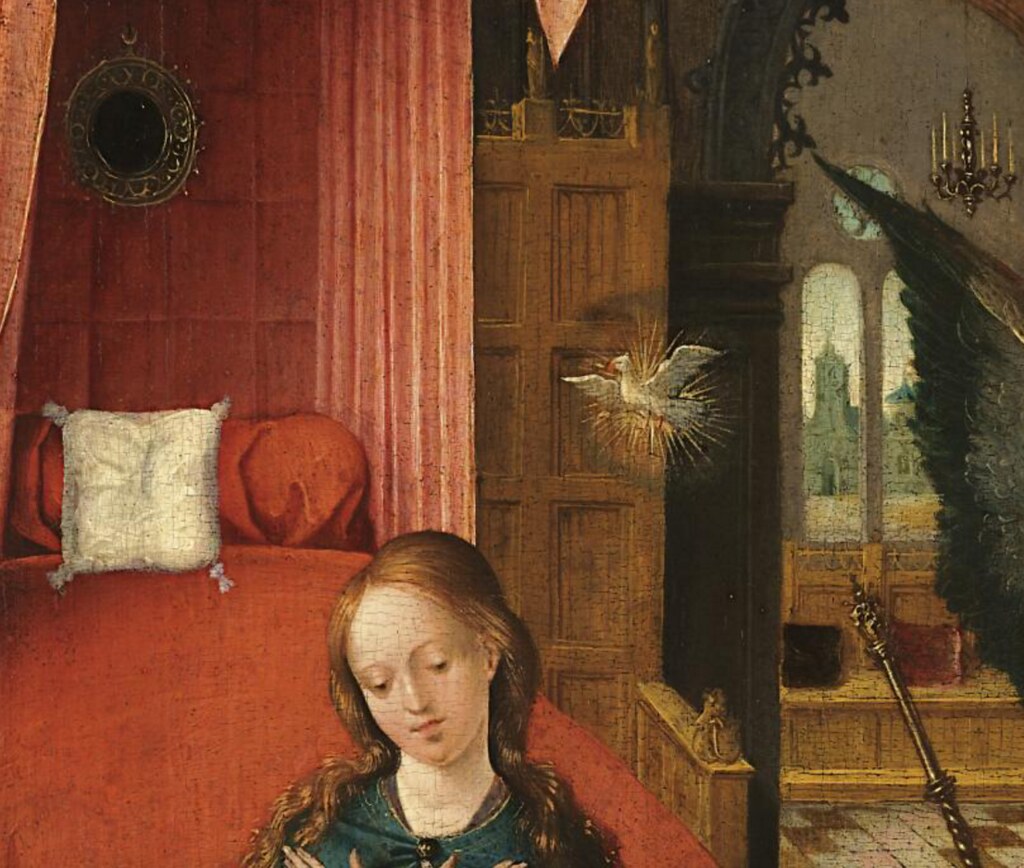 These were the works that I lately shared with this FB community about Flemish painters. But I also found many more works, both paintings and engravings, that I list below.

This panel is attributed to Jan Provoost (or sometimes to Pieter Cornelisz. Kunst) (c.1490) 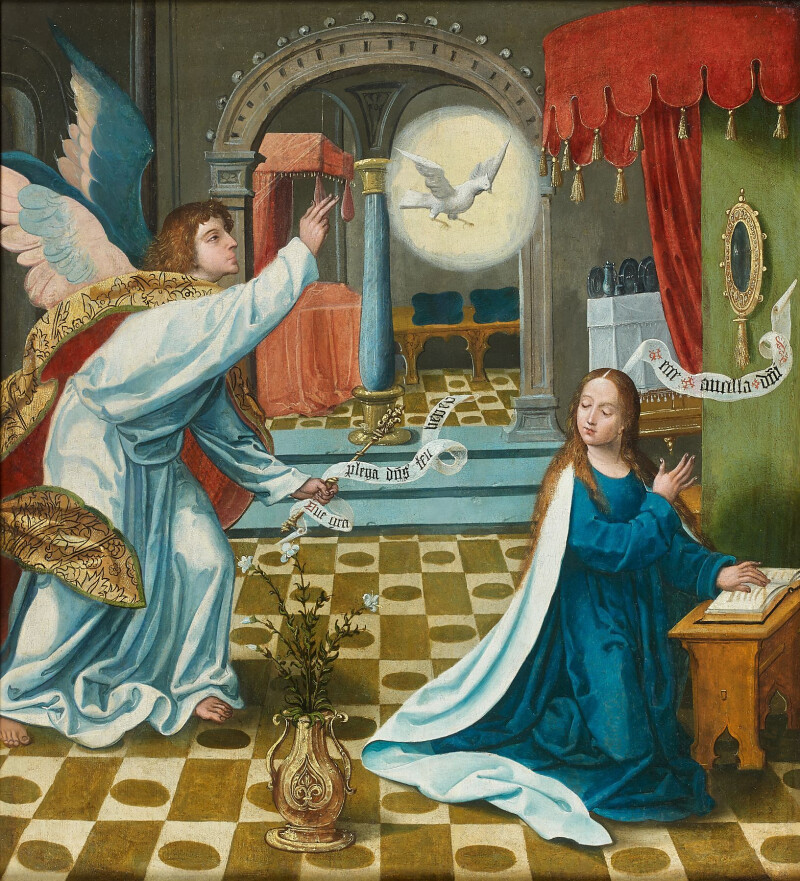 Yet another panel attributed to Jan Provoost (c.1510) 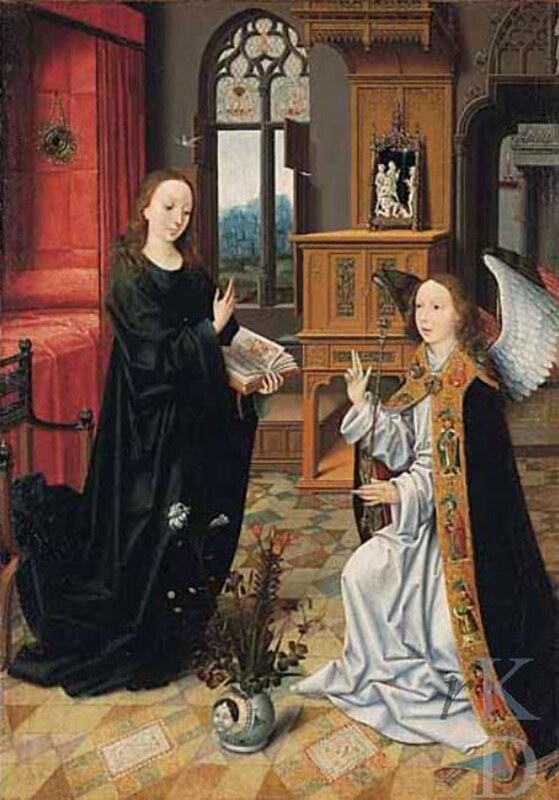 I am showing these works one after another, and this may create an impression that they constitute the majority. Of course, the truth is quite opposite, they are still quite rare findings. For instance, the very same Jan Provoost has many more Annunciation without any traces of mirrors, like this panel c.1500. 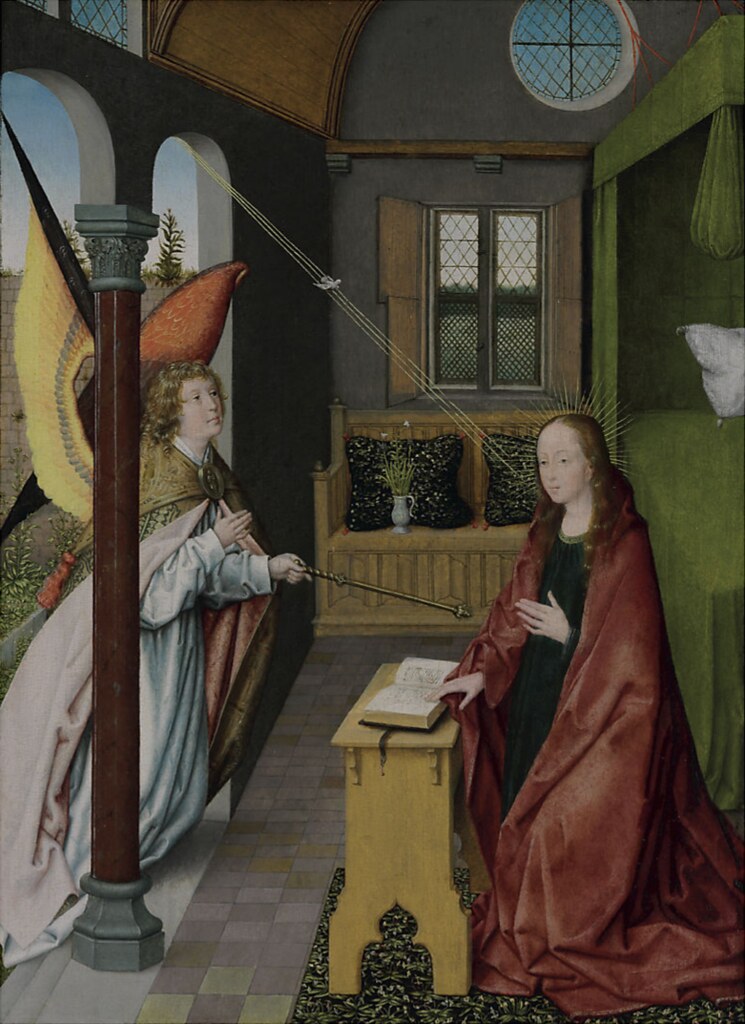 The name Jean Bellegambe sounds French, and he was indeed a French-speaking master, but still stylistically Flemish, born in Douai, the town in today’s French part of Belgium. This is a central panel of his triptych Annunciation 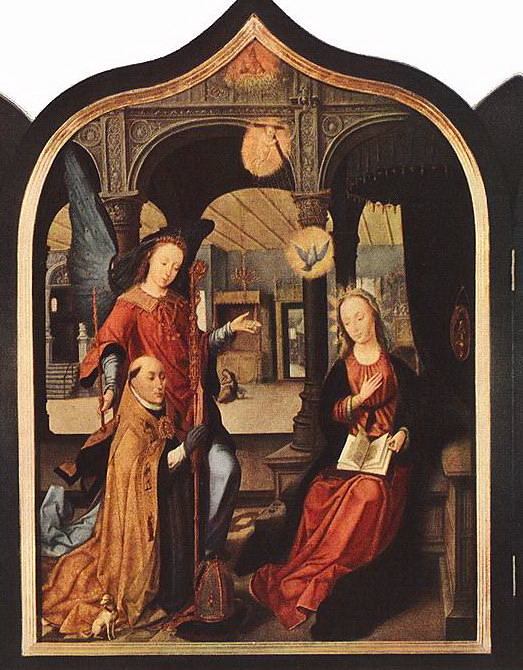 An enlarged detail shows a medallion (or perhaps a mirror) to the right side of Mary: 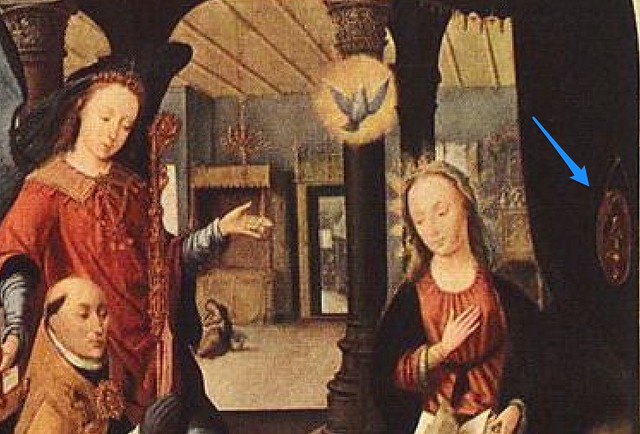 We tent to think about these works as oil paiting on wooden panels, but many of them started their live as drawings (especially later, from the 16th century onward). These drawings are very rare now, as very few of them survived, but they are as interesting documents as the paintings themselves.

This is a sketch for future painting by Frans Floris de Vriendt, Flemish painter who was already very influenced by the Italian High Renaissance style (and yet retained this typically Flemish mirror on this work c. 1535. 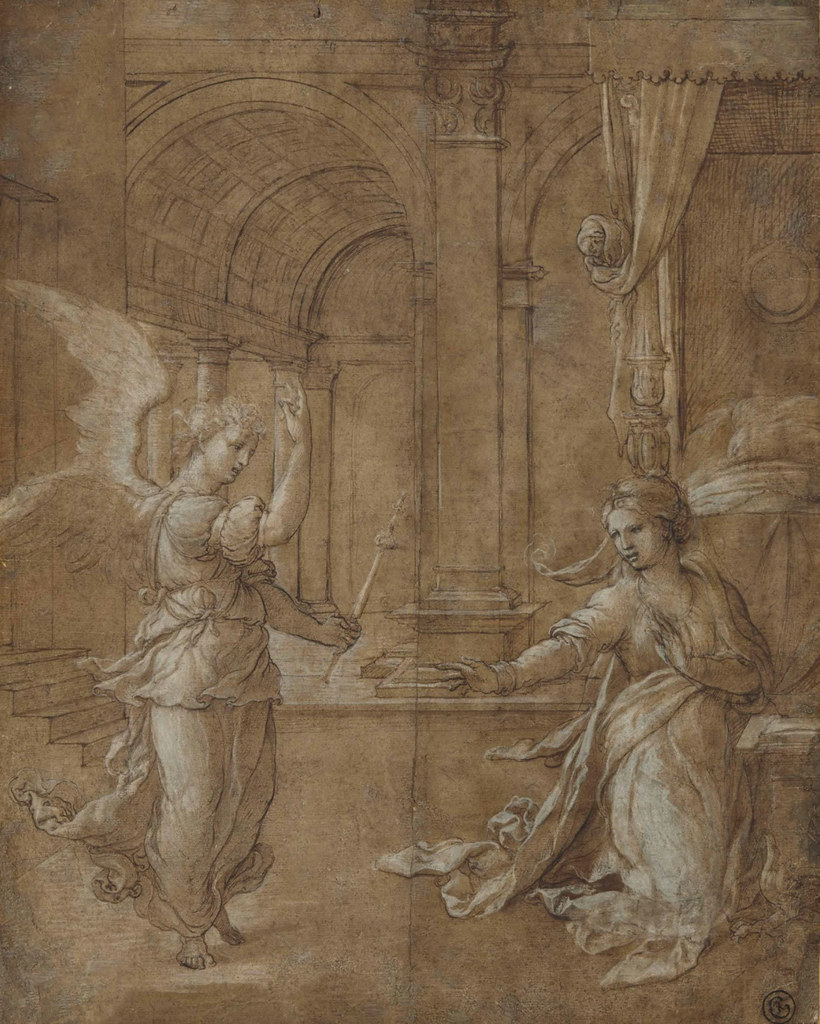 The last panel is also stretch, but geographical. This is the Annunciation panel by Hans Holbein the Elder, from the wings of his Kaisheim Altarpiece (c. 1502), currently in Alte Pinakothek, Munich. 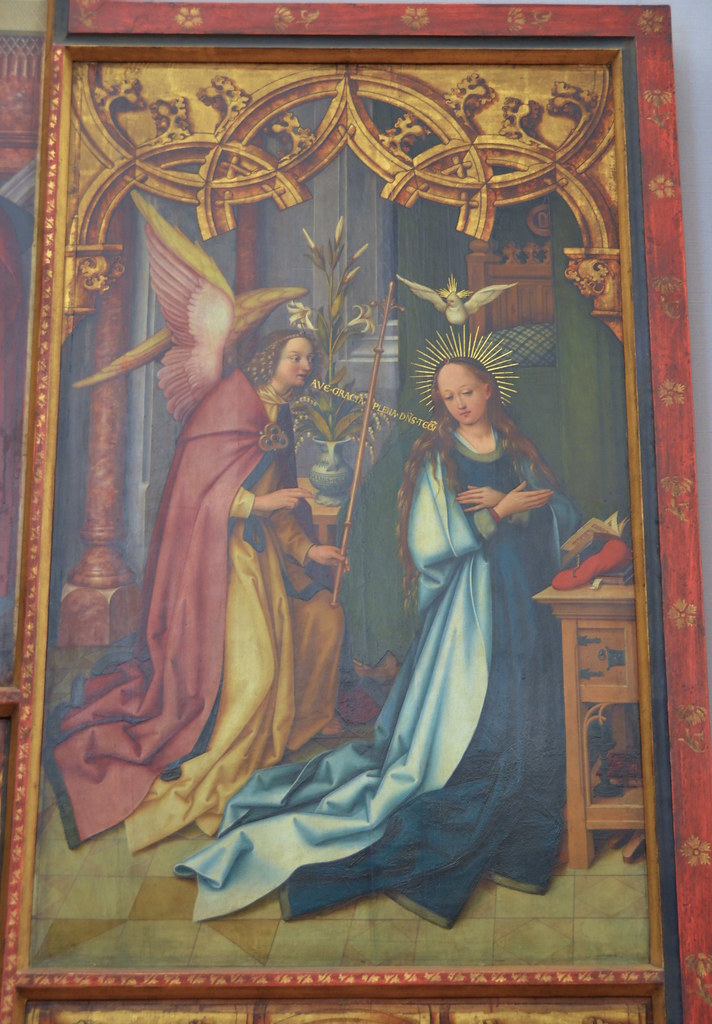 Yet its large detail shows a fragment of a very typical medallion: 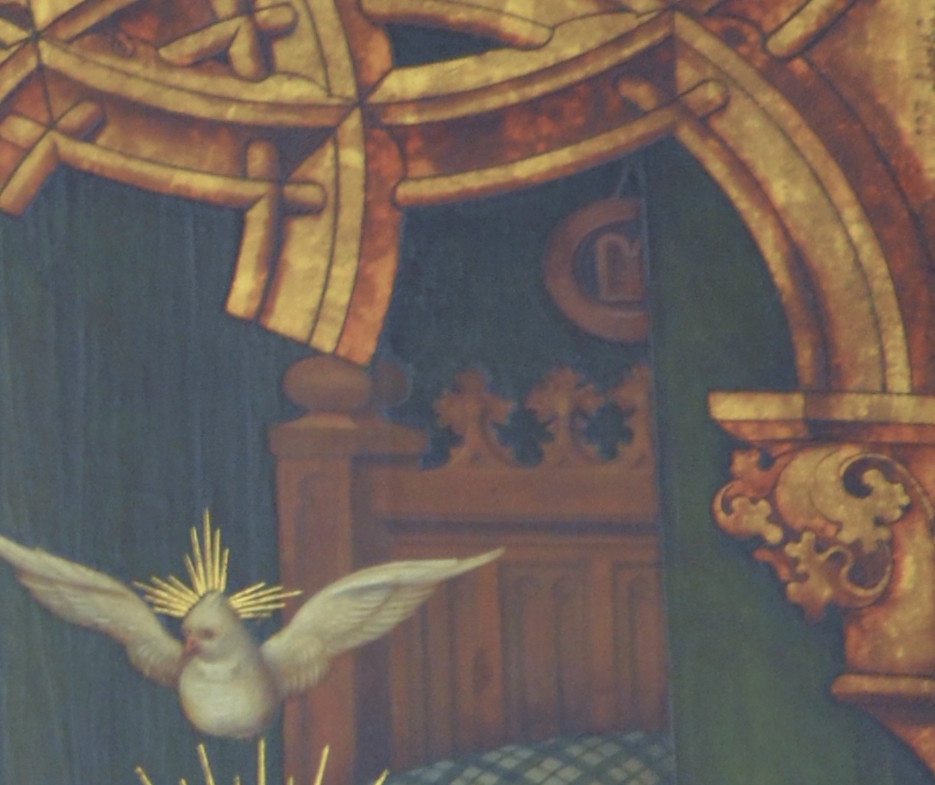 I am sure that there will be many more follow-ups of this follow-up, too.