This is one of those postings that ‘breaks the rule’.

I usually write these postings following a certain plan or an agenda, even if a very rough one. In other words, I have a long list of postings that I would like to write and tend to add the new themes at the end of the list. But from time to time I encounter something completely outside of this agenda, and if it doesn’t require too much ‘research’ to do  I just dump my thoughts and quickly write a posting as is. This is exactly such a case.

In many ways this is an epitome example of the ‘mirrors in art’ theme, and I mean  literally. The mirrors do constitute the essence of these art works!

This epitome case is the creations by an American artist Robert, or Bob Benson, from Baltimore, Maryland.  Bob himself explains that the origin of his art was plain simple: at some point he was so enchanted by the effects created by a mirror hanging on a string and reflecting the sun light that he decided to devote all his time to the creation of such mirror ‘things’.

The picture above is a typical example of what he makes, so called ‘mirror tapestries’. The static image does not reflect (sic!) how these things ‘work’ in real life, so I am also showing a short video illustrating these mirror works in dynamics.

Unfortunately WordPress does not allow to embed a video right into the blog, so the video can be seen by clicking on the picture: 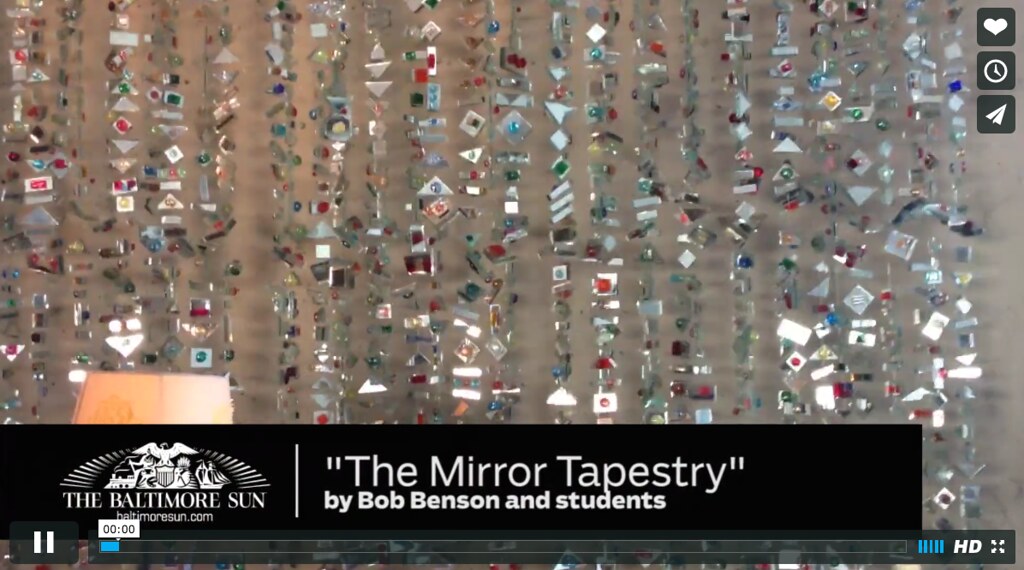 A more detailed close-up shows that this beauty is achieved using a combination of very simple things. The artist takes small pieces of mirrors and assemble them on strings, sometimes adding other colorful decorations. Voilà: 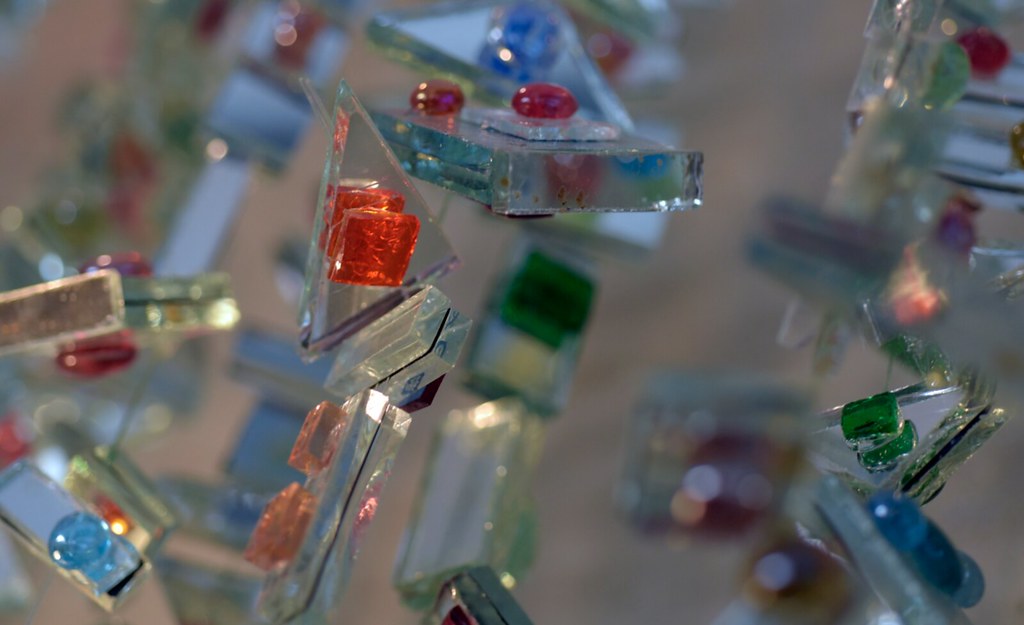 It seems that Robert Benson got totally fixated on this simple but effective way to produce wonderful mirror-things. By now he produced a great deal of this mirror-art that decorates his own house 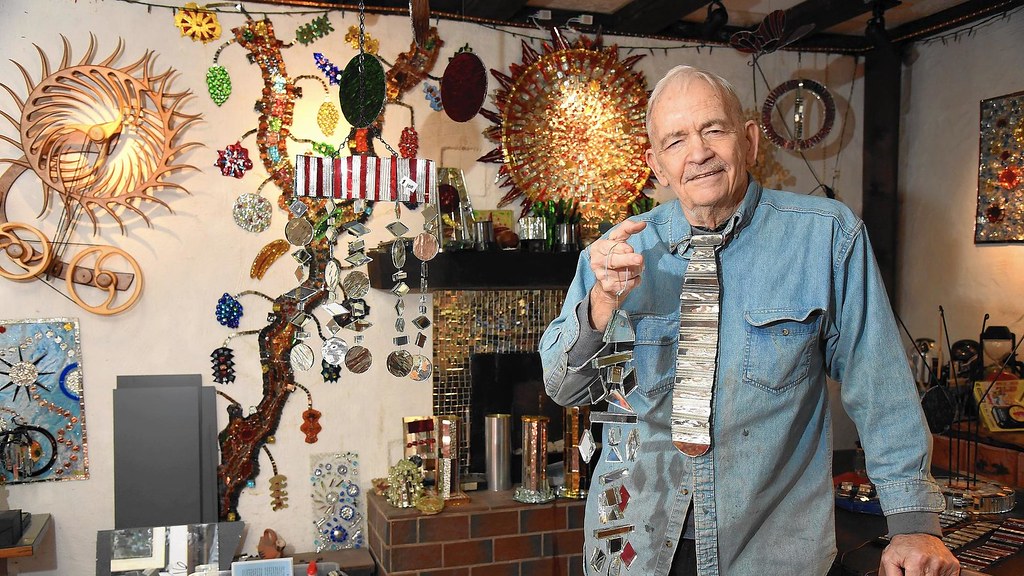 and everything around it: 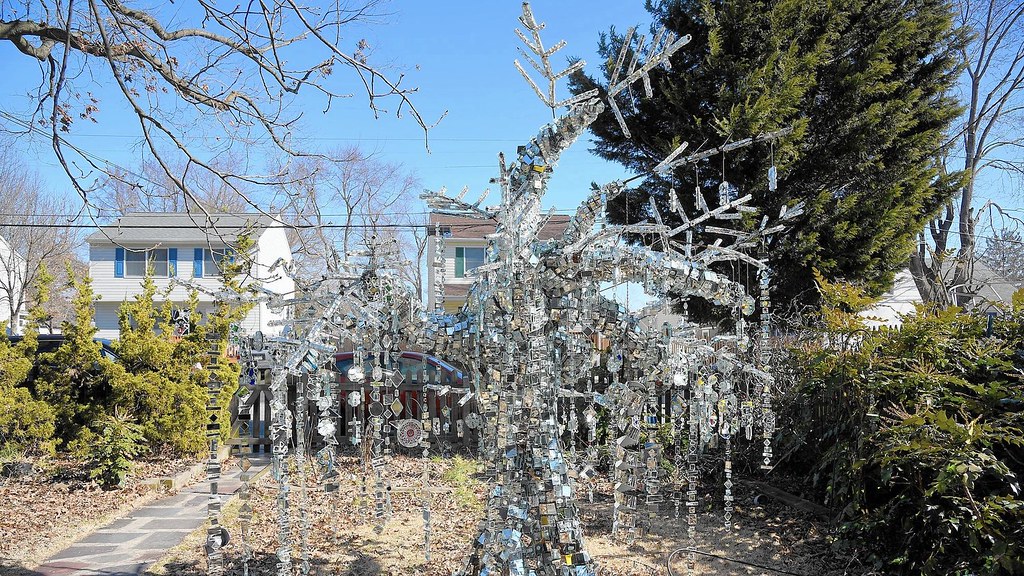 I see that he has also reached many other places, too. For example, the local American Visionary Art Museum have acquired a number of his mirror-trees that now entertain the hordes of tourists: 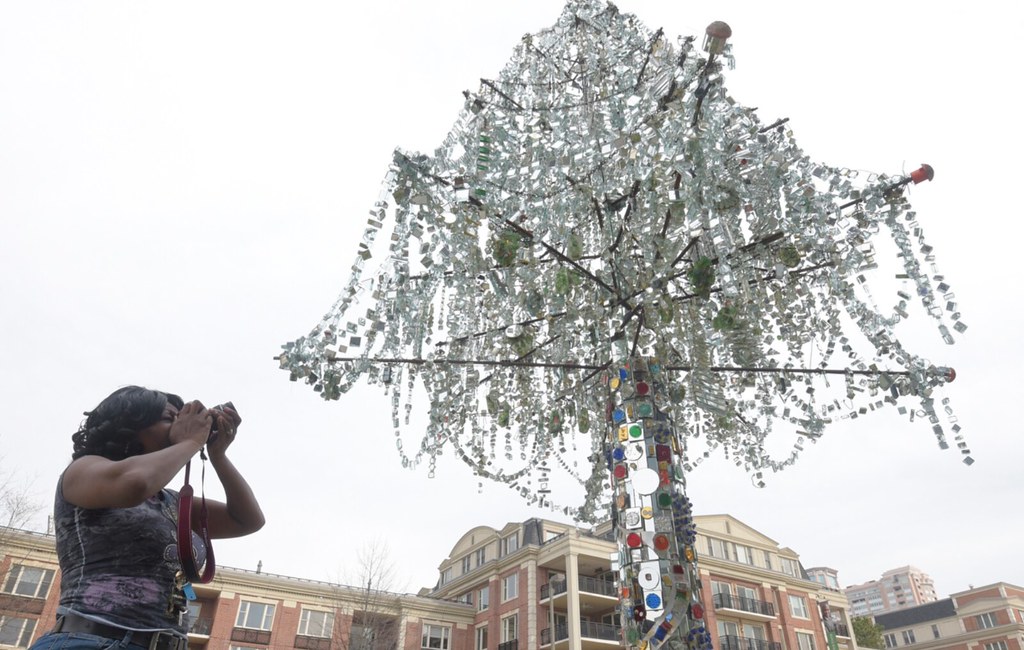 All the pictures that I use here are not mine, I took then from the two main publications available online: ‘Bob Benson, mirror artist‘ in the Baltimore Sun and ‘Bob Benson’s mirror art‘ in the Capital Gazette. All the rights belong to the corresponding authors (Algerina Perna and Paul W. Gillespie).

Both articles show not only the art works themselves, but also the process of their creation: 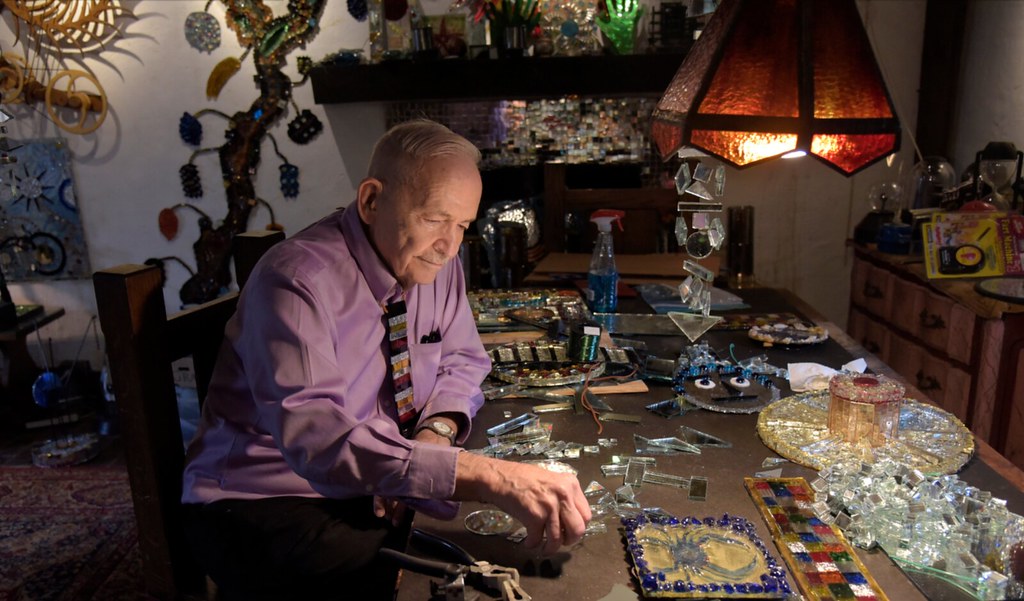 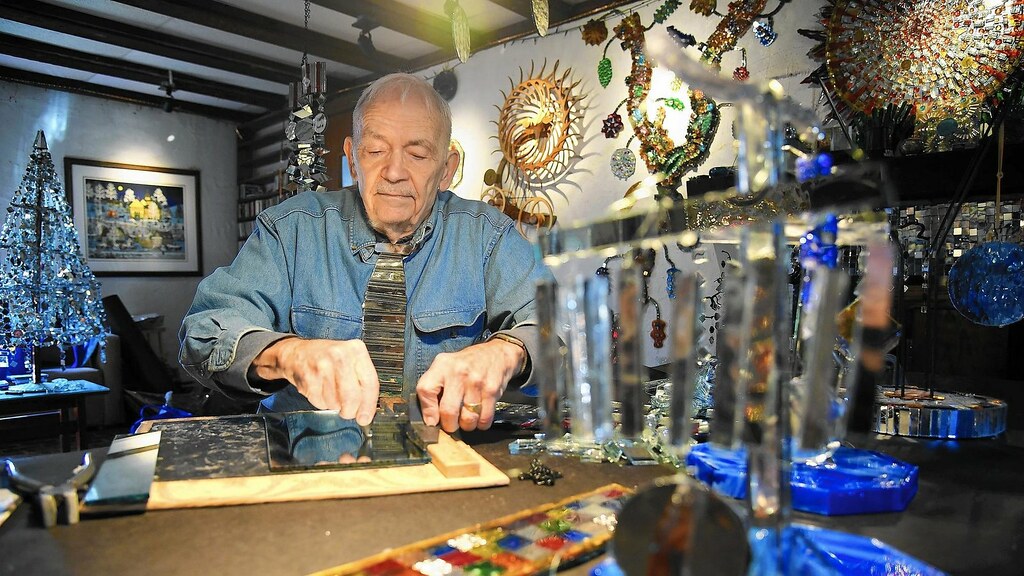 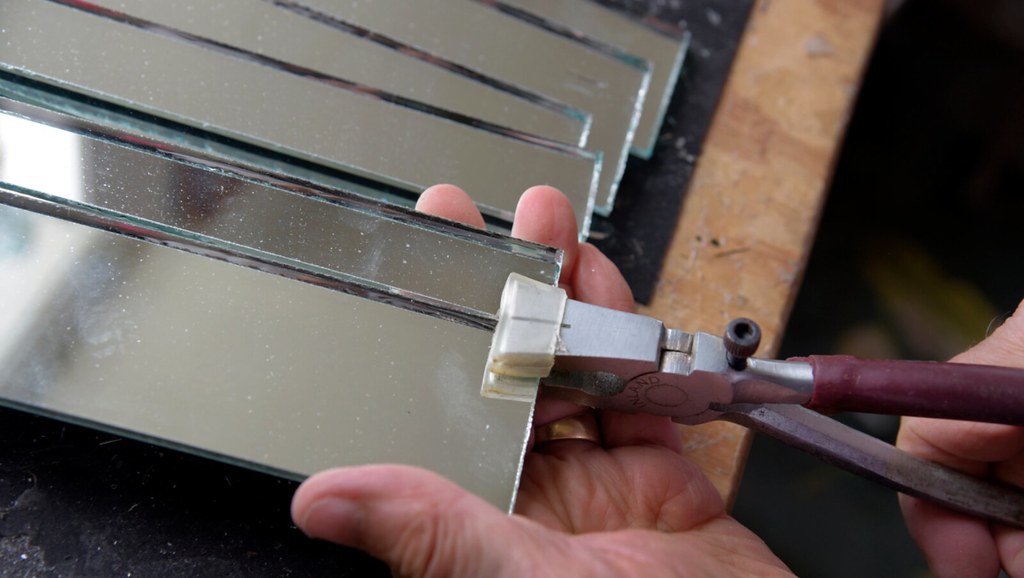 to making ‘mirror sandwiches’ of some sort: 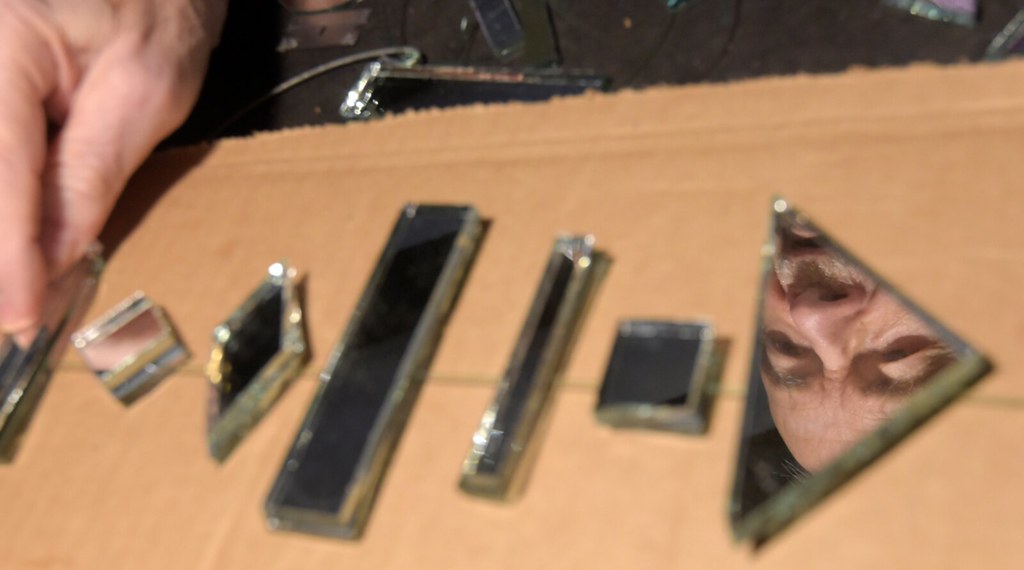 We can only imagine how Bob assembles these endless ‘mirror carpets’ 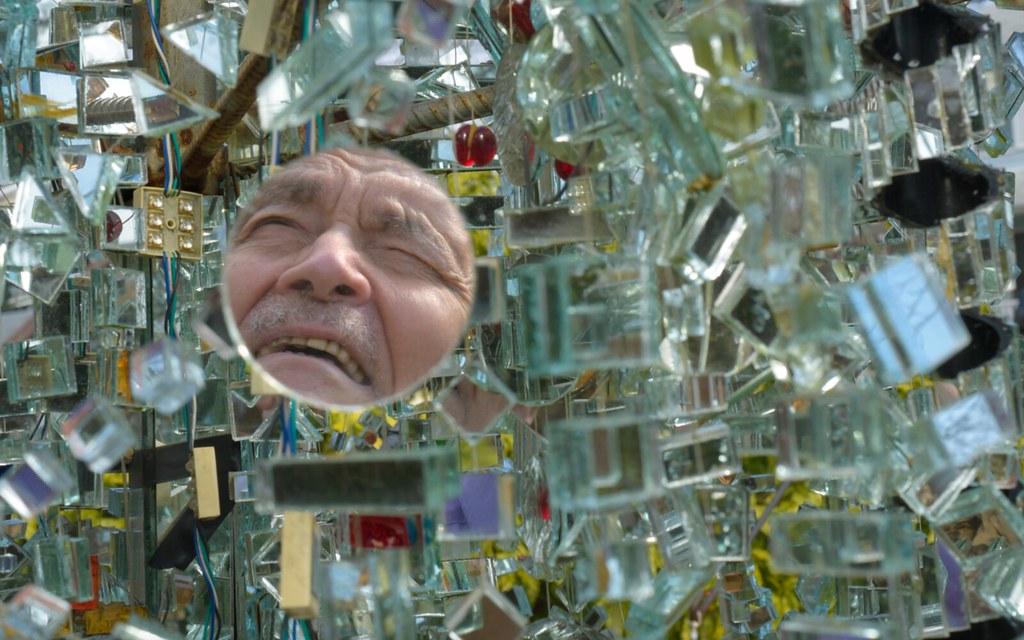 During the years of playing this mirror-art sport Robert also created many other formats, including, for example, mobile: 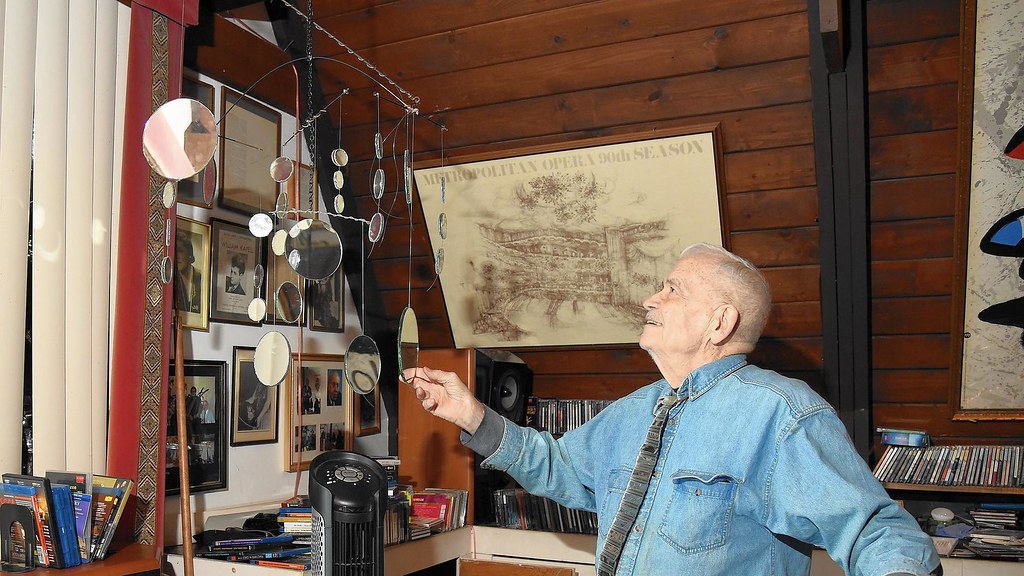 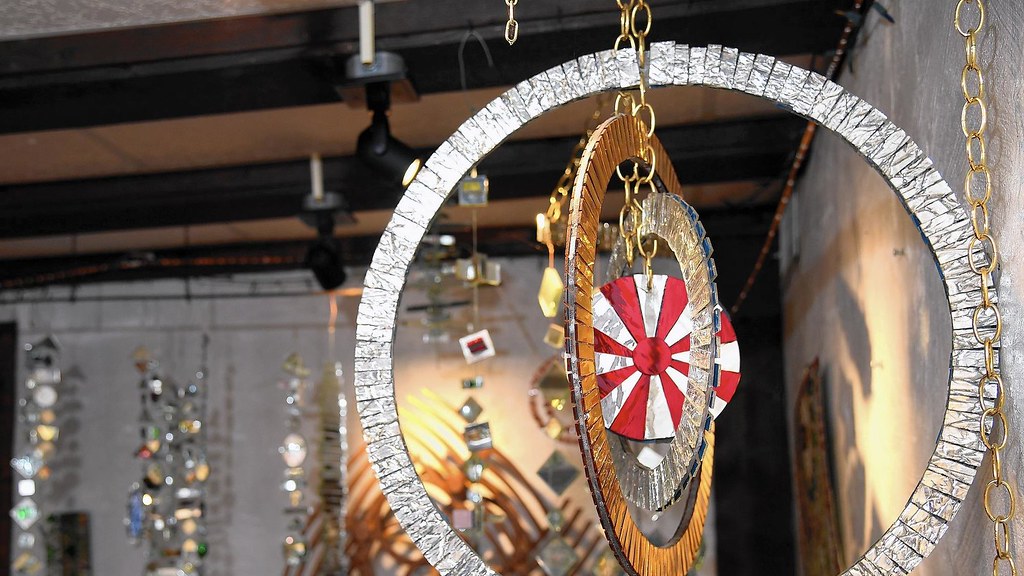 and yet another – large – mobile: 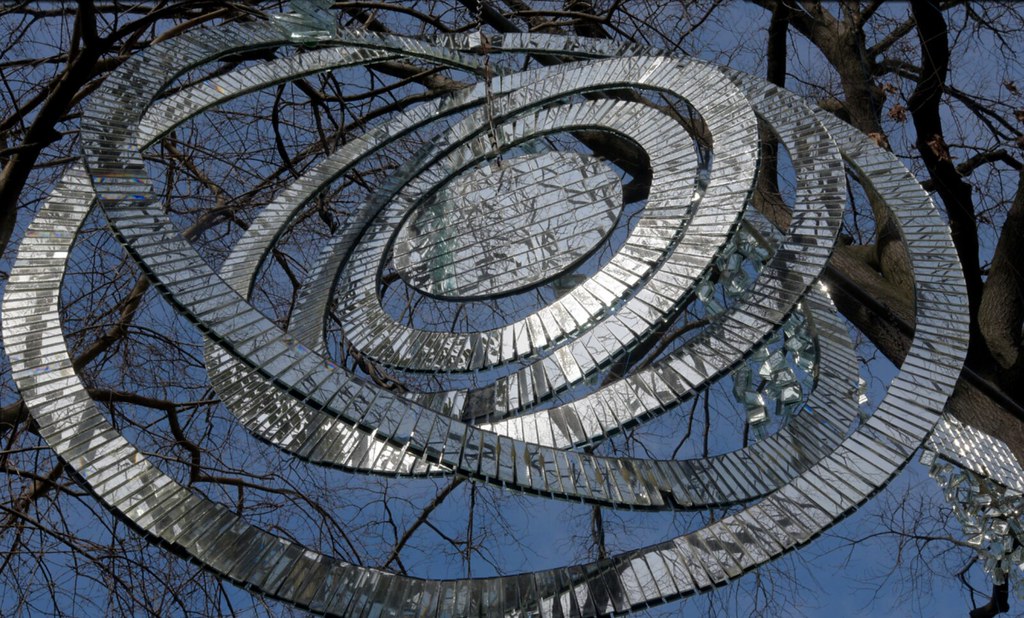 Some of these mobiles are more figurative than others: 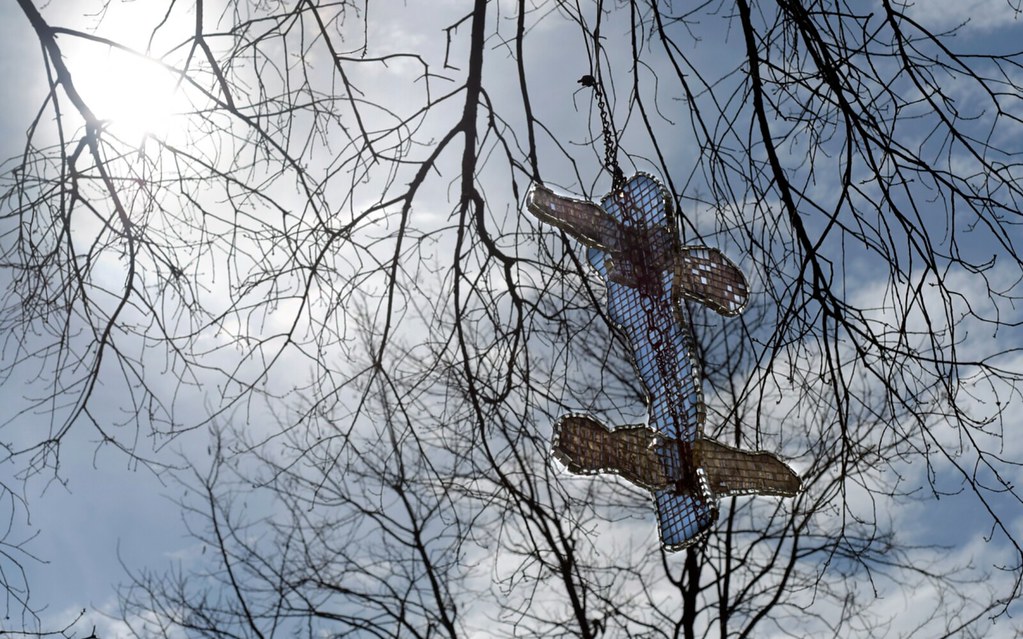 This one, for instance, represents the Star of David: 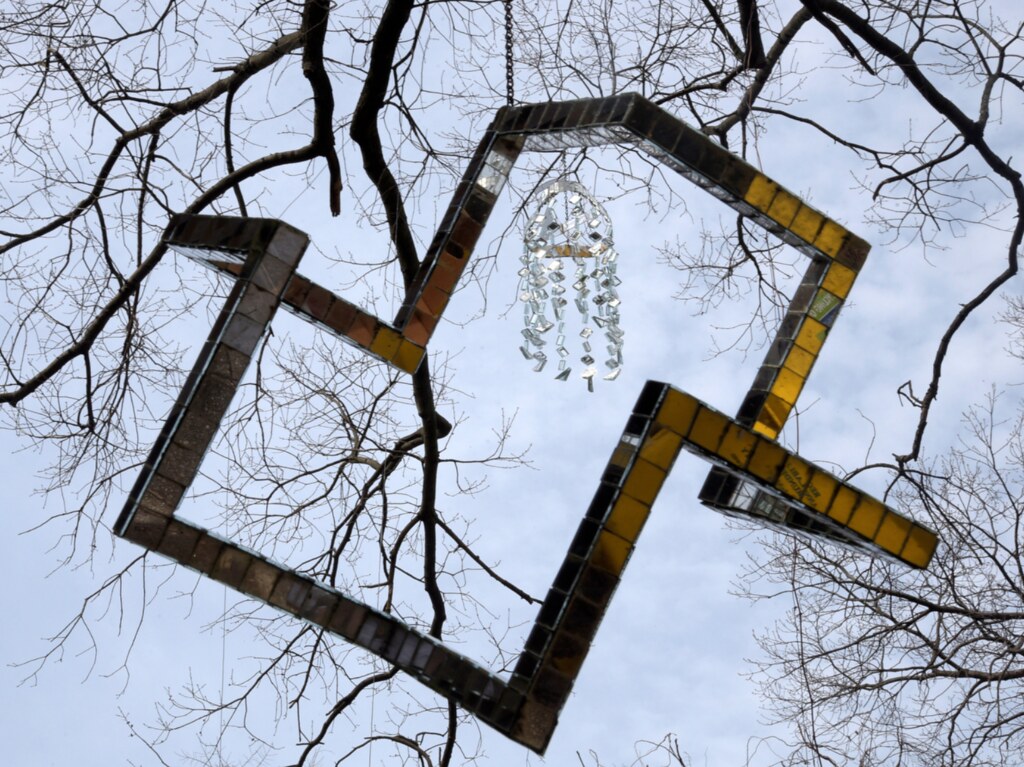 Perhaps it’s not very clear how it does on the picture above, but it looks more obvious on the one below: 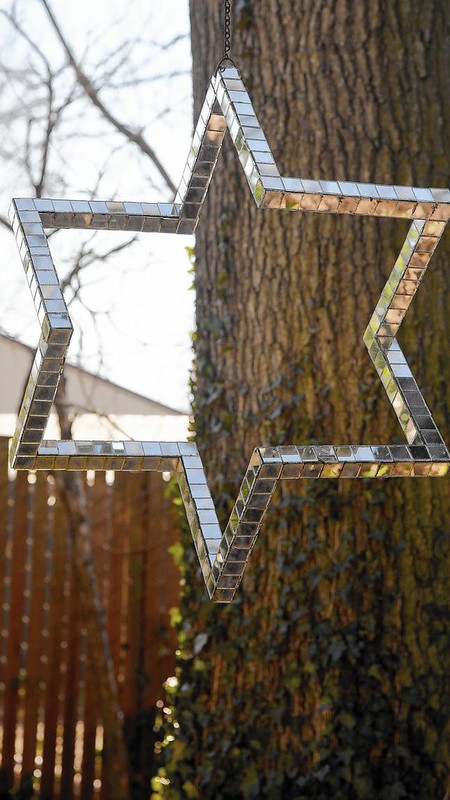 All these things look nice and cool, but I sense that his mirror carpets, or mirror tapestries remain to be the most popular format, perhaps because of this combination of simplicity and unpretentiousness and yet a very interesting visual effects they create. 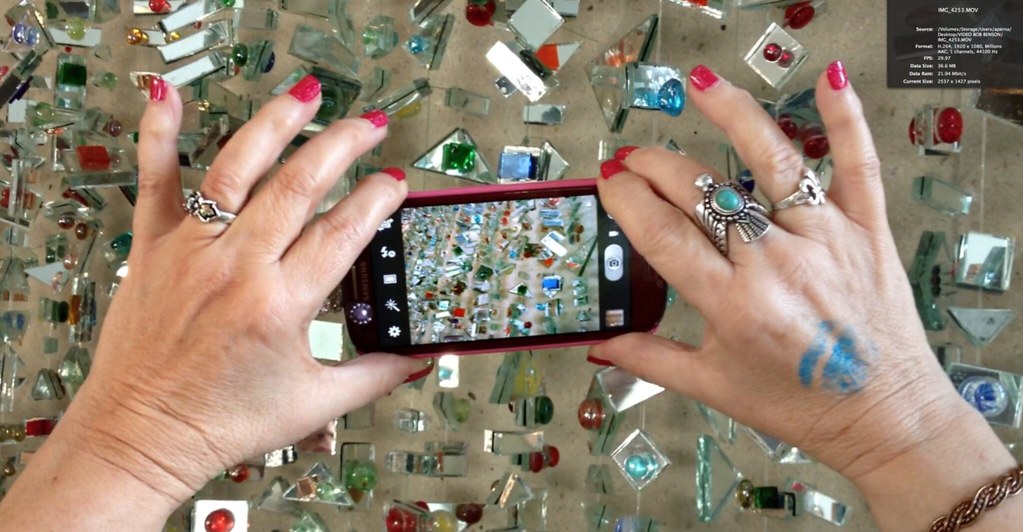 Because of the ease with which all these art works can be made, this is a truly DIY art. Robert runs numerous workshops during which participants learn how to create similar mirror things themselves. 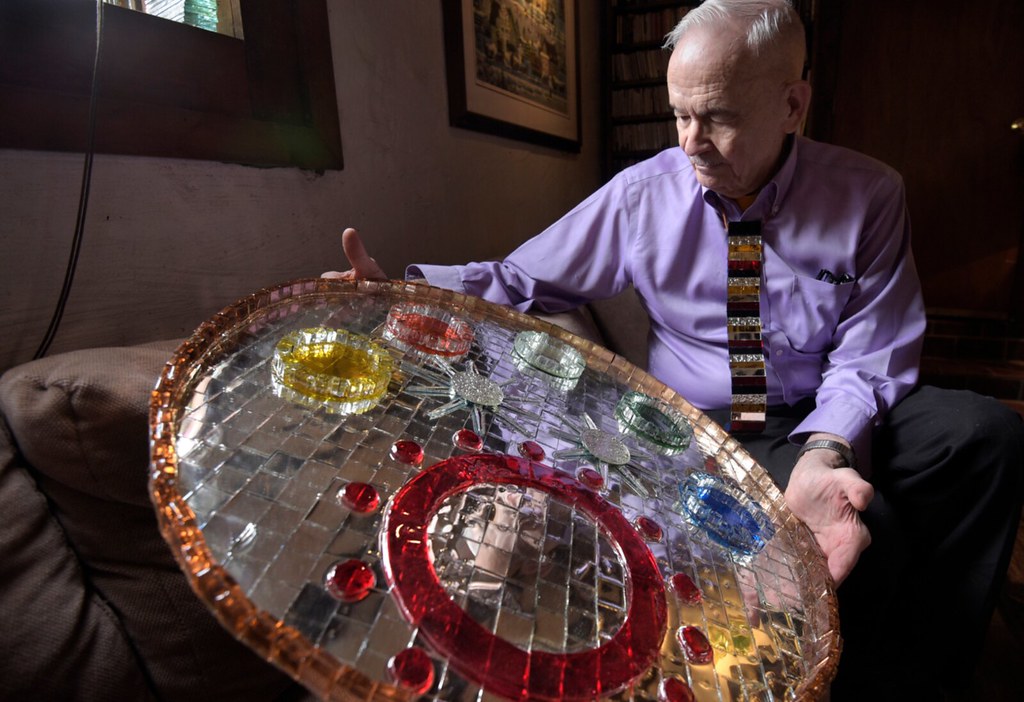 Very modest costs of the materials do help, of course: 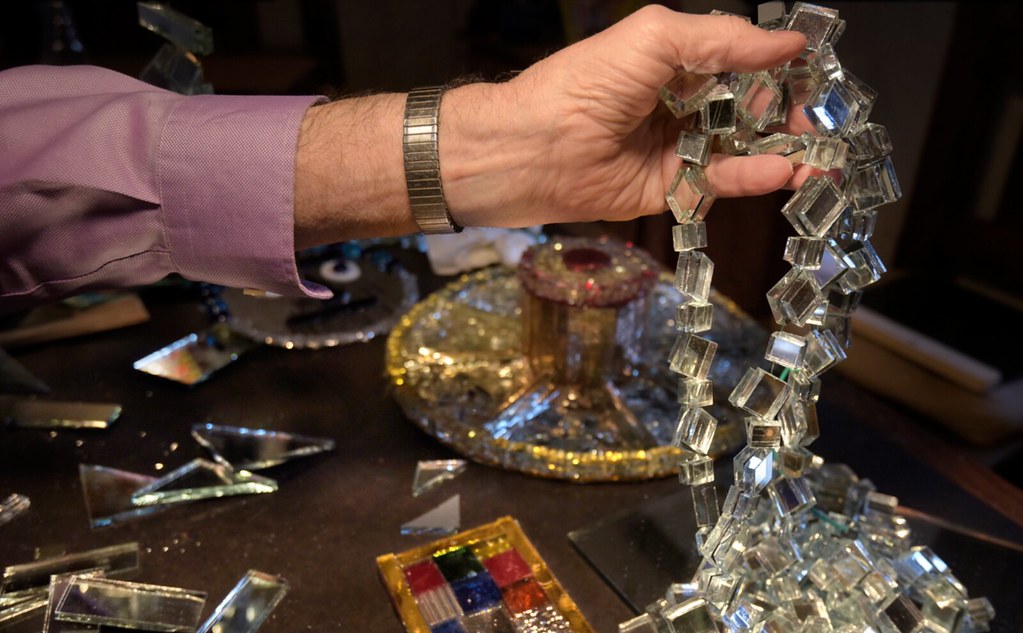 Of course, his larger structures, like the trees I’ve shown earlier, require more stuff to make and I bet they are more expensive: 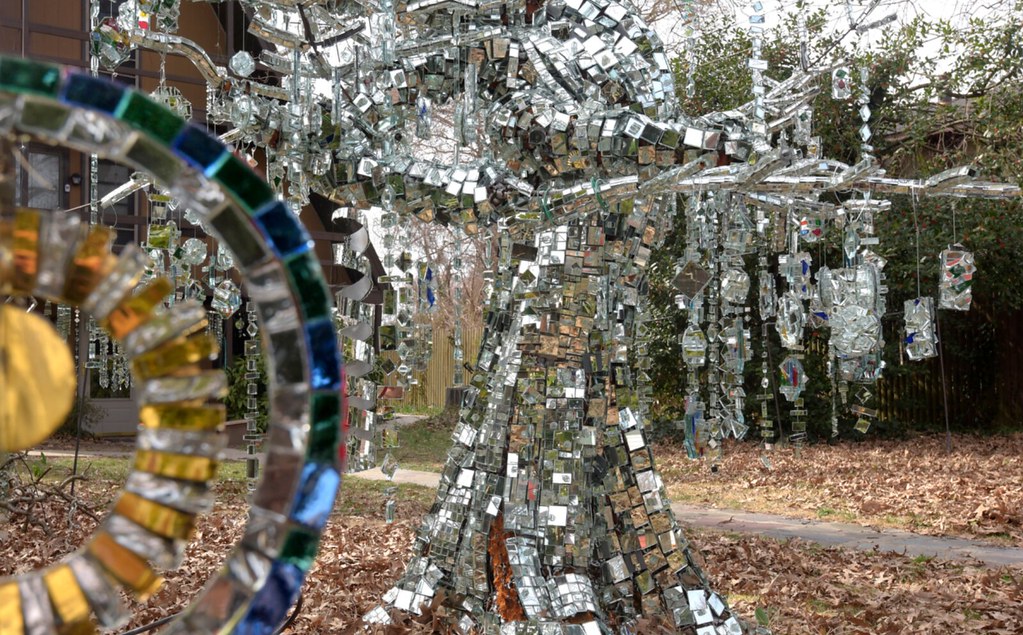 For instance, they need more solid metal frames to hand all these mirros: 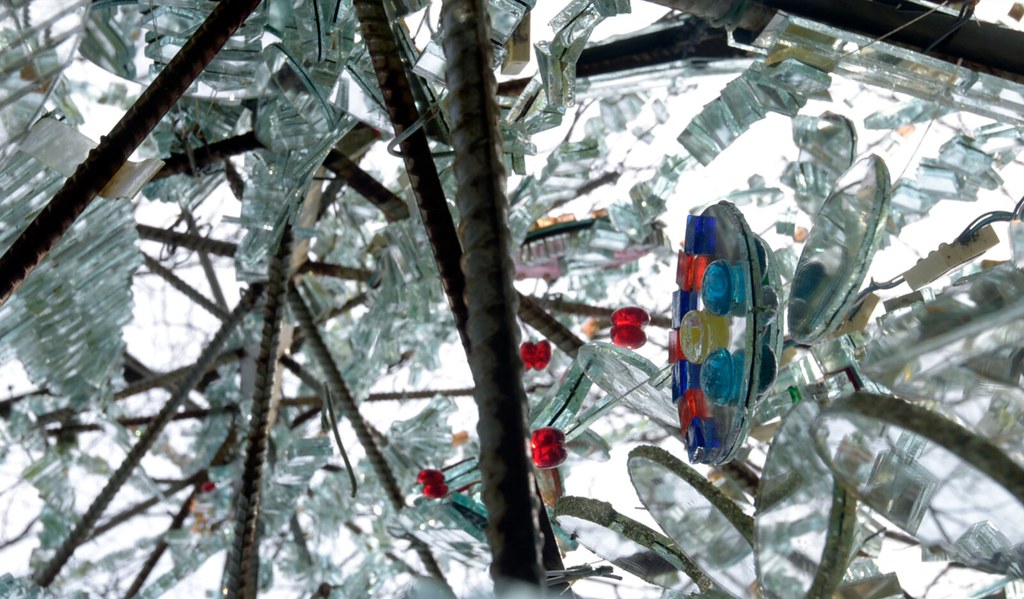 But I assume these are commissioned works, so the costs are covered. As I also understood, Robert is not making these more complex structure alone, and collaborates with other masters. 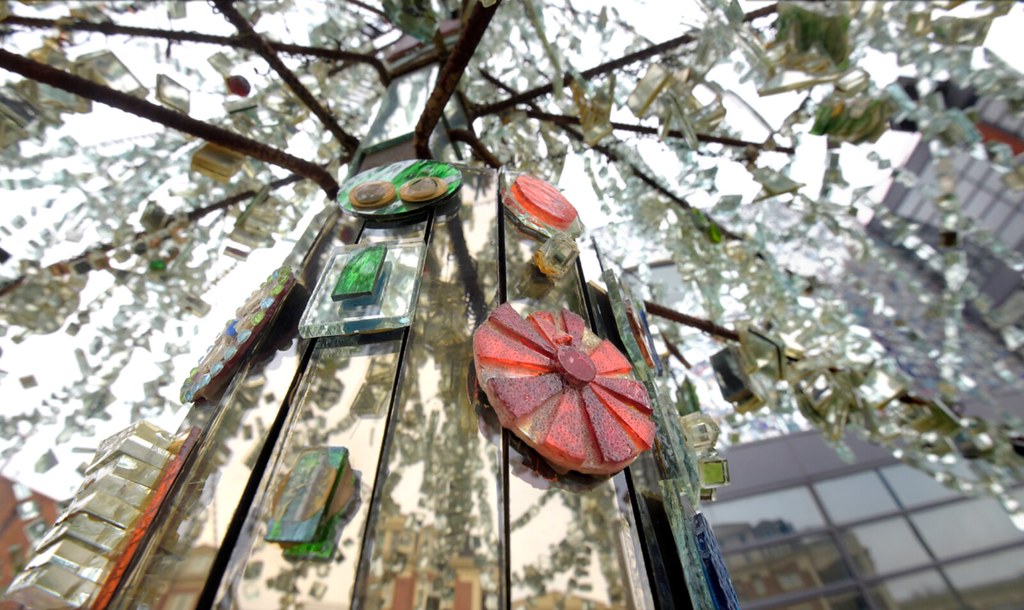 Well-settled in his familiar territory, Robert now also ventures into the ‘neighbouring’ genres, such as complex installations with LED. Among the recent works are the ‘infinite tunnels’ that became so popular lately (see the works of Peter Gronquist or Doug Durkee, for instance). 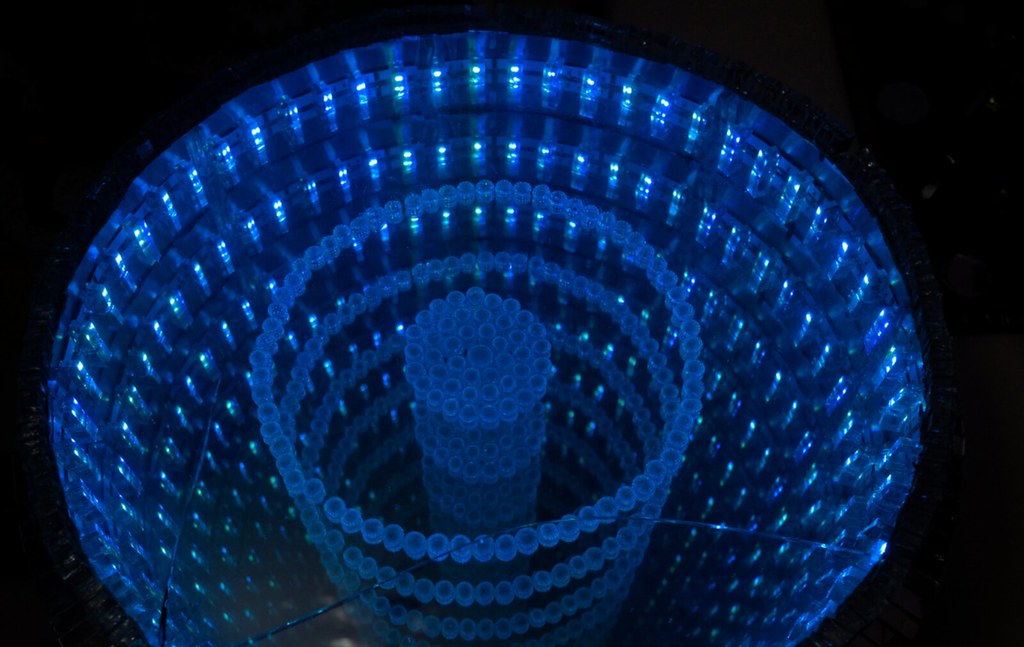 But as I wrote already, I sense that his heart is still with simple, often funny creations, and not with the latest technological tricks. 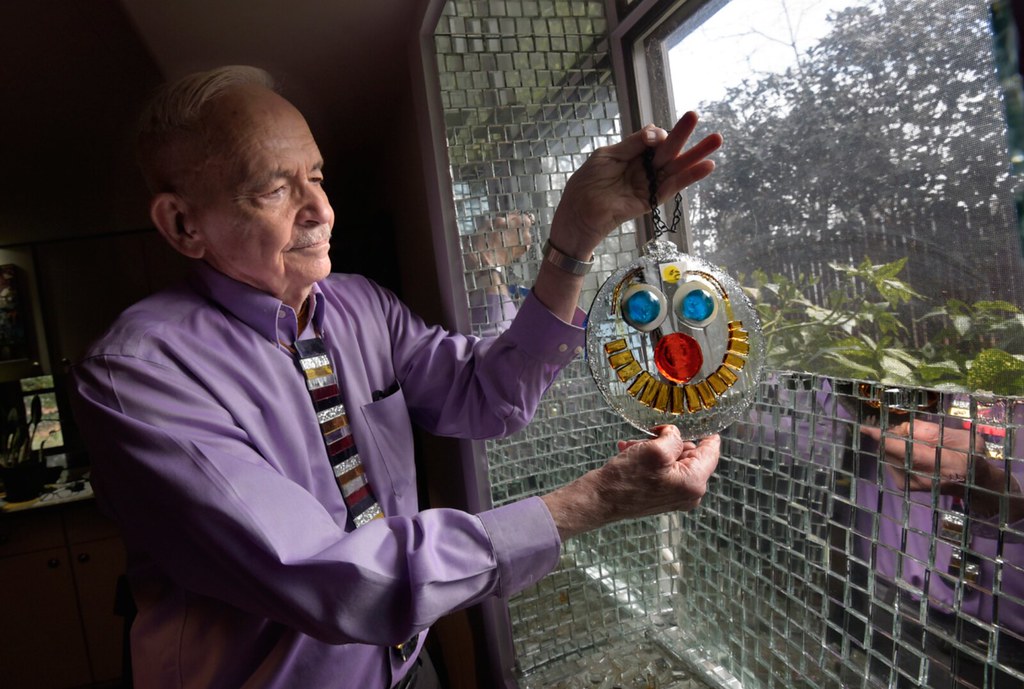 This last work (called oscillum) brought an unexpected catch. As Robert explains himself, “the design originates from ‘oscilla’ that Greeks and Romans hung in their vineyards to bring a good harvest. Bacchus, the Roman god of wine was usually depicted on one side of the disc.”

I made a quick search and it looks that these things indeed existed in Ancient Rome (or at least a wikipedia piece about Oscilla says so). It would be great to dig deeper into this  topic at some point, but for now I’d open this ‘small door’ into the new theme semi-open (or oscillating).

Here is an image linked to another short film about this artist (where he also tells some stories about his art): 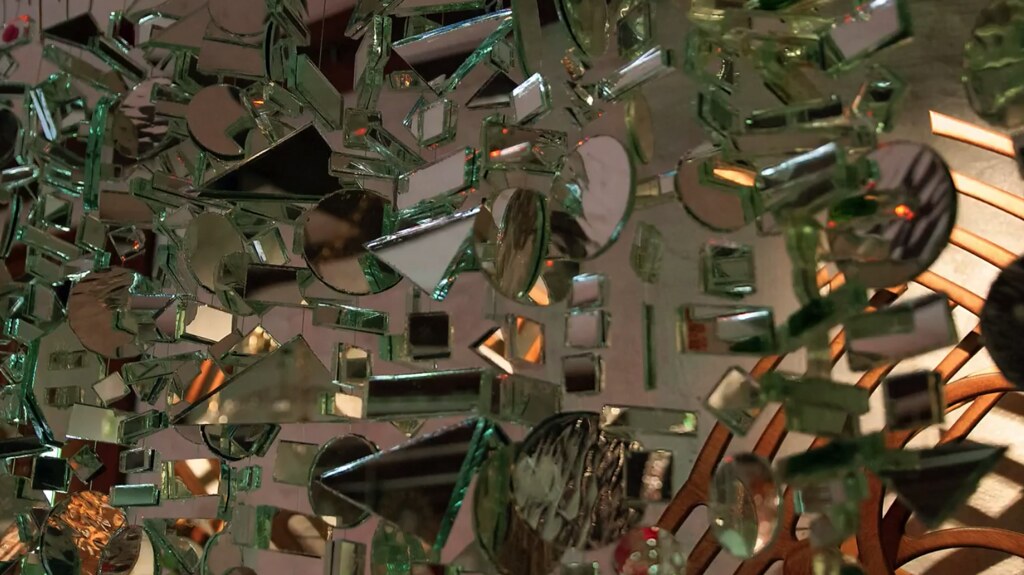 Robert is 86 years old, just for the record.