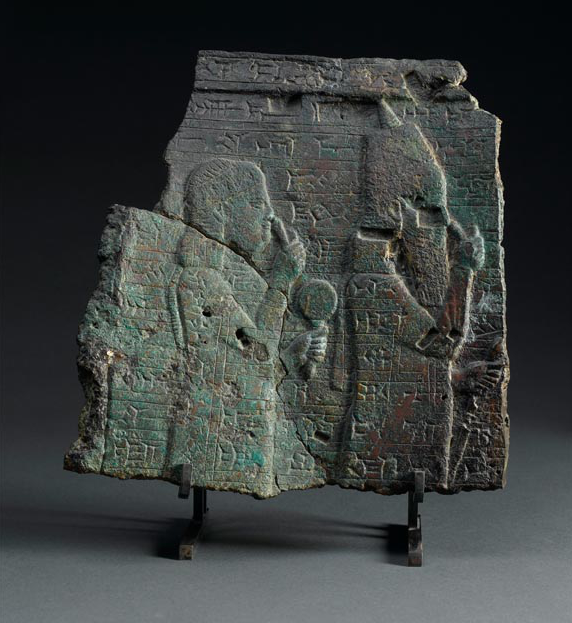 I had an idea to write a very short post here, just to clarify one point related to my earlier, and larger post on the mirrors of Ancient Egypt (see Mirrors’R’Suns, or Egyptian Reflections). There I was talking about a dual role that these objects – the ones we call ‘Egyptian mirrors’  – could play. I argued that they may be used not only as cosmetic devices (may be even not so much), but as sacred, religious artifacts.

Per se, it’s not a new statement in any way. We can find similar ideas in many texts on the history and art of Ancient Egypt. What I was missing is the depiction of the second type of use. We see many ankhs, and I have shown a great deal of them too, but to treat ankhs directly as ‘mirrors’ requires a bit of a leap of faith, so to speak.

Basically, we are missing the images where people would held (and use) the objects that are resembling the ‘mirrors’, but would clearly use them nor for grooming, for example, but for something else.

I wouldn’t know where to search for such images, though. In this domain I don’t yet have an amount of knowledge and expertise I have about Western art and history (and specifically about Christian art, for example.) Using this expertise, I could almost anticipate where to look and how to find the next ‘mirror/non-mirror’ in the painting or other (art)work.  I experienced this ‘pattern recognition’ with the mirror-icons, for instance,  in the Annunciation scenes (I tried to describe this feeling in one of the earlier postings, On pattern recognition in the mirrors).

It is in this context I encountered the pictures of stele that I show above.

Here is an enlarged fragment of this picture, showing what I am most interested in: 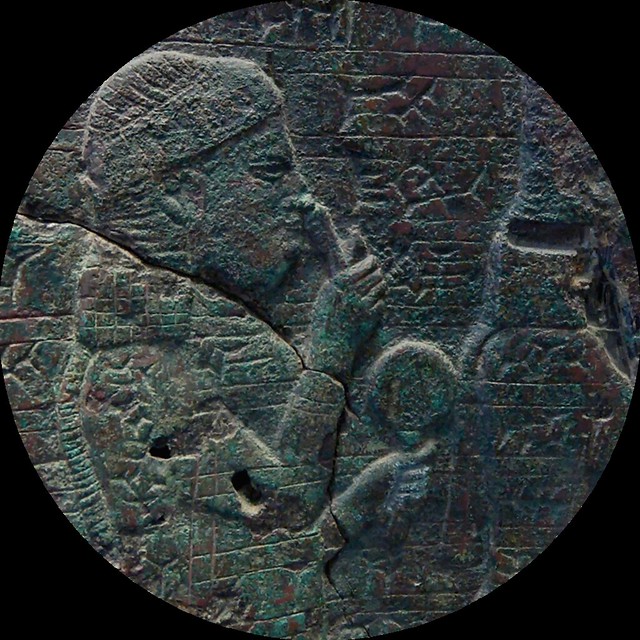 A couple of explanations.

First, it’s not really the Egyptian artifact. The stele was found near Babylon (contemporary Iraq), during the archeological excavations of what is believed to be the Temple of Marduk. Marduk was the superior deity in ancient Mesopotamia, often depicted as either having the wings himself, or riding various winged creatures, such as dragons. 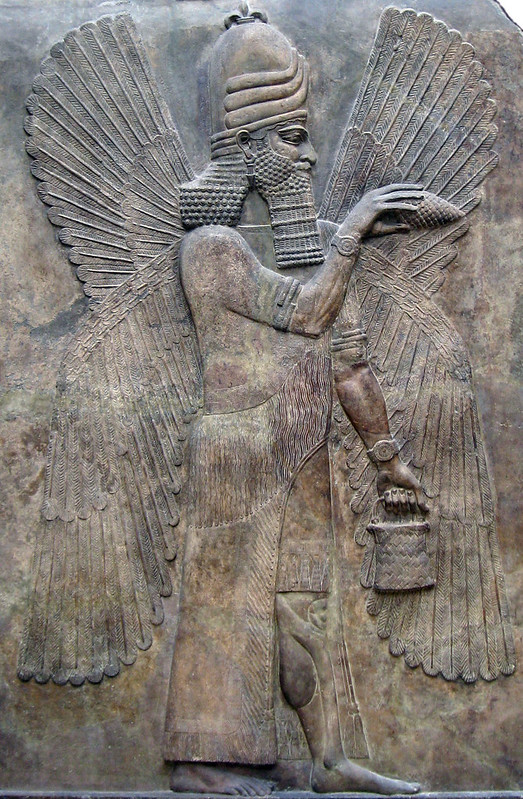 Marduk was the god of the Sun and as such, of fertility and growth, but also of wisdom and magic, and of many other useful things, too.  However, it is not him who is depicted on the bronze stele that I have shown earlier.

It is the King Esarhaddon and his Queen Mother Nakija. King Esarhaddon was an Assyrian king who ruled around 680-670-s BCE and who is often considered a re-builder of both the city and the state, whose glory was lost in the preceding wars. It is him who is also connected to the construction of the legendary Babylonian Tower (which was, as we understand it now, a real ziggurat, albeit very tall, around 100 meters or so. Among his many faces, Marduk was also a patron of the City Babylon, so it’s understandable that King Esarhaddon would want to please him by such a monumental construction.

It is in this context I would like to know what is exactly the object hold by the Queen Nakija. I understand that when I describe it as a ‘mirror’, it could well be a wishful thinking (and in reality this could be a flower, or an orb symbolising the Queen’s power (although in the latter case this would lead to another set of questions, to the very turtles, so to speak). But my main ‘catch’ would be to find the evidences that it is a ‘mirror’, but used for ‘something else’ (e.g., as a symbol of divine power).

Worth remembering that it is not such an old artifact – I mean, it is old, of course, but not as old as many other artifacts of the ancient Egyptian kingdoms that we find. Both its ‘function’ and its iconography could well be impacted by the very ankhs, for example, and they way they’ve been depicted. But they may be as well have a very original local meaning, too.

In any case, and even in a greater extent that my Egyptian scribbles, I would count this posting as the very first stub into the subject. 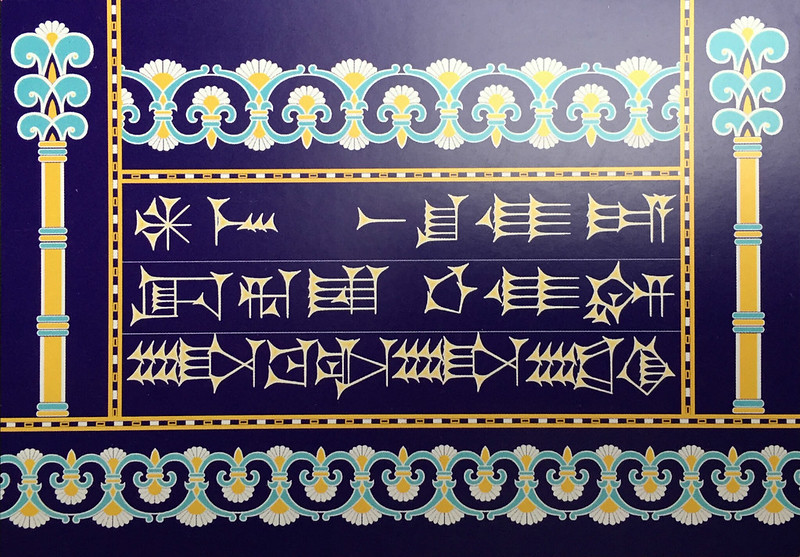 Almost five years after the posting was written it got an attention of a true professional in the field of Ancient Near East, Janine Wende from the Universität Leipzig in Germany. I have to admit that it was’t a completely unsolicited attention, as I described this project to Janine, albeit very broadly, and in a different context (we’ve been involved in postcard exchange; the picture above is in fact one of the postcards I’ve received).

Janine was very kind and compiled a list of corrections and additions. I would like share it here as is, that is, I don’t want to re-write my own text, however erroneous it may be, but instead add these suggested below corrections  below, in italic.

1. I described this artifact as ‘stela’:

JW: It’s most likely not part of a stela, but a metal plaque used as a wall ornament.

2. I wrote that it was found near Babylon during the archeological excavations:

JW: I don’t know where that info is from, but by all accounts the piece was not found during excavations. It was acquired by the Louvre in 1954. That means is was unearthed illicitly.

JW: Always give the museum no. of any object. In this case there’s even a nice Louvre page – Plaque of King Esarhaddon and the Queen Mother Nakija

[I am not sure that I knew back than that this object is in the collection of Louvre, I likely found it on Pinterest or something similar. It is indeed in Louvre, and its official number is AO 20185; Richelieu Wing, Ground Floor, Room 230 (Mesopotamia and northern Syria. Assyria), display case 4]

The plaque was discussed shortly after its acquisition by Parrot and Nougayrol, two  prominent figures in the field of Ancient Near East.  It was them who concluded that it 1) shows Esarhaddon (the king is not mentioned) and 2) is related to his reconstruction work in Babylon. It is therefore likely to come from there, but not certain.

The authors are also very sure the lady is holding a mirror.

3. I wrote “Marduk was the superior deity in ancient Mesopotamia”:

JW: He was the chief god of the Babylonian (that’s not all of Mesopotamia!) pantheon in the late second and first mill BC. His history is long and complex.  For info on Mesopotamian deities, you can rely on Ancient Mesopotamian Gods and Goddesses at ORACC (Open Richly Annotated Cuneiform Corpus).  Here’s Marduk’s entryx.

4. I wrote: “Marduk is depicted as either having the wings himself, or riding various winged creatures, such as dragons”:

JW: None of that is true.

4.1 After that sentence I show the image of (allegedly) Marduk:

JW: That’s not Marduk. It’s not even Babylonian, but Assyrian. We don’t actually know his name, but he’s divine and purifying something. There are dozens of these and we call them „winged genies“. (They are probably the origin of our idea of winged angels.)

of fertility and growth,

but also of wisdom and magic:

JW: At least in a certain type of incantation, he really was 🙂

Naqīʾa. It’s West-Semitic and means „Pure“. There is some speculation that she was of West-Semitic origin (as opposed to Assyrian or Babylonian) but there’s really no proof for either.

7. King Esarhaddon is also connected to the construction of the legendary Babylonian Tower:

JW: He (started to) rebuild/restore it. It had already been around for about a millennium before his father Sennacherib damaged or destroyed it. It’s name is Etemenanki (every Mesopotamian temple has a name).

We recently discovered a stele with a drawing of it, it is the coolest thing: 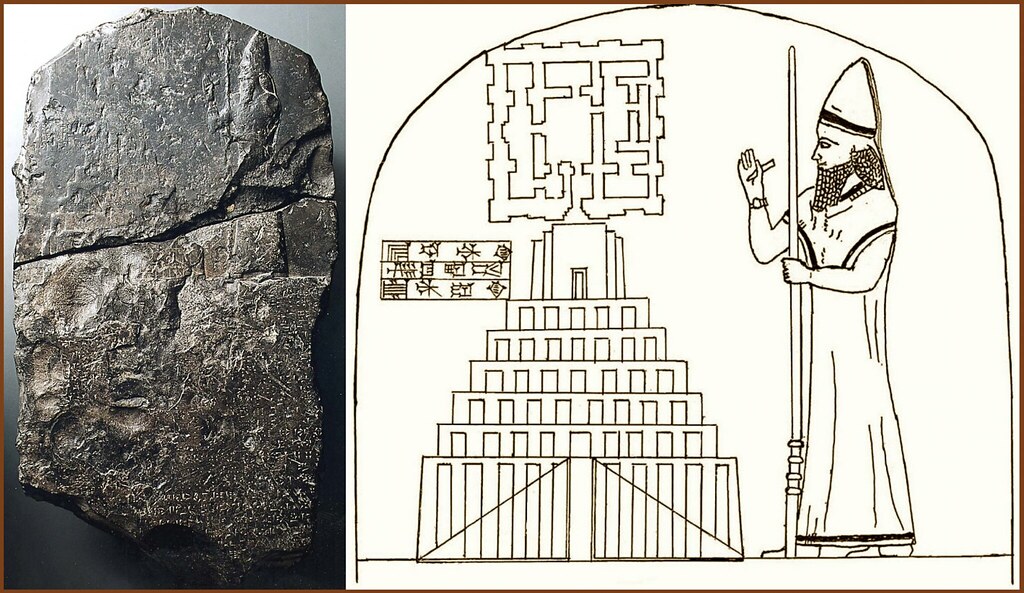 The Temple of Babylon stelle and its reconstruction by Martin Schøyen,
after an original drawing by Andrew George

I wrote “Among his many faces, Marduk was also a patron of the City Babylon”

In addition to all these useful corrections and additions, Janine also shared another important piece of information:

JW: The inscription of the piece really has nothing to do with mirrors at all, but here it is anyway: http://oracc.iaas.upenn.edu/rinap/rinap4/Q003412/html

Now, the significant thing here is that (acc. to Parrot and Nougayrol op. cit.), there have been no depictions of the “woman with mirror” motif in Assyria prior to the discovery of this one. There have been similar ones in what is now Syria, though, in the Aramaean city states that mostly became vassal states to Assyria in the preceeding centuries.

Janine also adds that the article is really from 1950s, and expects that “something else has turned up since then.” So do I.

As often happens with my early postings, this one was painted with rather bold stokes and is full of mistakes, omissions, exaggerations and ungrounded assumptions (exactly as I described the nature of live blogging 🙂   I hope, though, that this text, and especially after the corrections and additions made by Janine – which I very much appreciate  – will work as a springboard to the new, hopefully more comprehensible texts about these issues in the future.