This story started in the National Gallery that we recently visited. During this visit I came across this beautiful and interesting work called The Virgin and Child Enthroned, with Saints (see the picture above). It’s a fairly large triptych, about 150 cm tall and more than 2m wide with open wings. Apparently it was restored not so long ago, as it was all shining and full of intricate details.

I didn’t manage to explore all these details back there, also because of spending not much more that the notorious 27.2 seconds near every painting (allegedly, the average time we spent per art work). Plus, it was not allowed to take pictures in the Gallery (my usual way of exploring the paintings in the museums is by taking pictures of very small fragments of the works and looking at them more carefully later). It was not possible in this case, alas.

The name of the master – Jan de Beer – did not say anything to me then back then, so I just noted it down and decided to learn more about this works later.

When looking at this work in the museum, I got interested not in the mirror-like elements (I didn’t spot them first), but in those ‘dolphins’ decorating the throne of the Virgin.

I saw similar ‘dolphins’ in several other works, too – to only realize that I know nothing about their symbolism (and therefore need to learn more too, somehow).

But later and in the vicinity of these ‘dolphins’ I also found some mirror-like elements in this work:

The pillars of the throne are made of glass, or crystals of some sort, and reflect something resembling a window in them. This seems to be a bit strange, because the whole scene happens outdoor, so to speak, and there shouldn’t be any windows in the vicinity.

In one of the glass balls (beads?) on the right we see something like a face; it would be great if this is the case, because it would be the only self-portrait of the artist known.

As it happens, we know very little about Jan de Beer.  The article on Wikipedia consists of one short paragraph (NB: Currently – as in 2015 – the article is much larger, but at the moment of writing this post it was indeed just one paragraph).

The Gallery managed to stretch it to two paragraphs…

“Jan de Beer was born in Antwerp, probably around 1475. He was considered to be one of the greatest painters of the ‘Antwerp Mannerists’,

He was an apprentice to the painter Gillis van Everen, who ran a painting practice and became a frequent participant in the Antwerp Guild. De Beer joined the Guild as a master in 1504 and, only five years later, was elected as alderman In 1515 he became Dean of the Guild. After 1519, there is no documentary evidence of his activities until 1528, after his death. ”

… but if we let all the air go, we end up with the same one paragraph.

As I said, the name of the master didn’t ring a bell for me in the museum. But his works were really nice, and I’d like to show here a few more details:

I was particularly intrigued by one figure, a woman wearing strange headdress:

I had a vague feeling that I saw this face already, somewhere.

Only later, when already back home, I figured where:

with no less impressive headgear.

Through this lady and her headgear I figured that I actually had one of the works by Jan de Beer in my ‘Mirror Treasure Box‘ already, and indeed with a mirror in it: 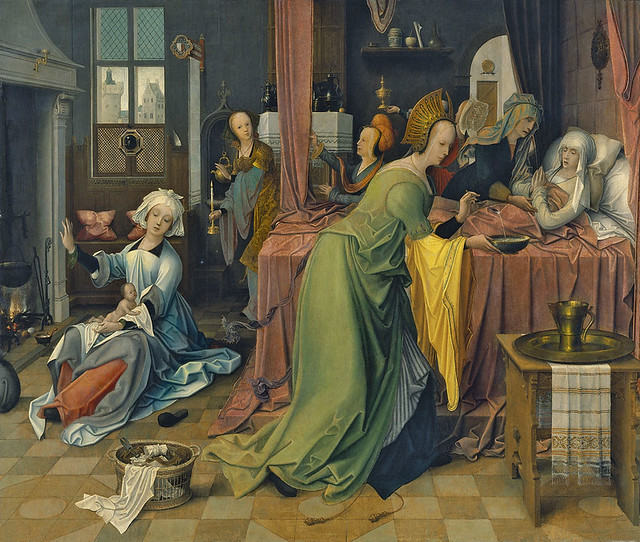 Like all other art works (including a triptych which I began with), this painting is only attributed to Jan de Beer (and as with all these presumed works, it is always appended “and a workshop.”) Also, as in the case of almost all other works of the master, the date of creation is  indicated approximately, between 1515-1520 years (the site of the Thyssen-Bornemisza Museum says 1520).

Personally I would attribute this work to an earlier date, say, the beginning of the 1500s; it’s a hybrid, blending hyper-realism of the old Flemish masters (e.g., Jan van Eyck, or Rogier van der Weyden) with some elements of the Flemish mannerists, with their elongated, Modigliani-like figures). Later de Beer created even more mannerist works.

Content-wise, the painting depicts quite a scene known as The Birth of the Virgin. Mary is the young girl whose back is warmed near the fireplace. Her mother (and thus the grandmother of Christ), St. Anne is laying on a bed. It’s interesting that we see only women in this scene: I guess it was a common practice of those times to expel all the males during the delivery).

Like many of the old Flemish interior paintings, this one also has plenty of small and interesting objects; the meaning of some of them we can guess, while other remain quite puzzling.

A pitcher of water with a towel, an attribute of many paintings with St.Mary too (especially, of the Annunciations):

Women’s needlework (the scissors are cool, they work on a completely different principle than the ones we use now):

Judging by her hairdress, she wasn’t an ordinary maid; a midwife?

She is holding a spoon with in the left hand; any special meaning? also, of the whole procedure of feeding?

I’d also like to draw the attention to a tray mounted above the door in the back room; some of these things had been also used as reflectors, especially with the candles placed in front of them.

Finally, the main item in the context of this blog:

I was writing, few times already, about the use of mirror in the scenes with St.Mary, and their meaning in this contexts (see the Nieuwenhove Diptych (1487) by Hans Memling, 1487) or St. Luke Painting Madonna (1490e) by Derek Baegert), but this should be the earliest appearance of (or an encounter with) a mirror in Mary’s life.

Compositionally (and therefore content-wise too) the mirror here resembles the one in the Memling diptych: we see only the back of the woman reflected (but not the baby herself).

It is worth mentioning a very unusual, octagonal frame of the mirror; it looks simple, but quite rich. It’s likely a convex mirror, which is also stressed by the use of a strong light flare in the upper left corner (which, of course, may also have a symbolic meaning, e.g., the light of the sun shining in the presence of the Virgin, or something of this sort).  Or the light of the candle?

In short, it would be yet another case of the mirrors in the scene with St.Mary; interesting, but not adding much new.  But then I suddenly discovered another object in the picture, the one that nobody talks or writes about:

This ‘thingy’ that hands above the head of St. Anna is not even an artefact, but a whole gadget. It is very elaborate, very beautiful, and completely mysterious. What is it, precisely? It’s very tempting to describe it as a mirror, too, but the one embedded in a very complex frame. The closest comparison that comes to mind is, of course, the mirror of Arnolfini that is also framed with the round medallions.

However, I somehow sense this is not a mirror, but something else. Even it it would have some features of the mirror (e.g., its ventral part would reflect light), this gizmo should be called differently, and used for different purposes. More reading ahead expect I!

(PS: Man years later I had a chance to see this painting in Madrid myself: 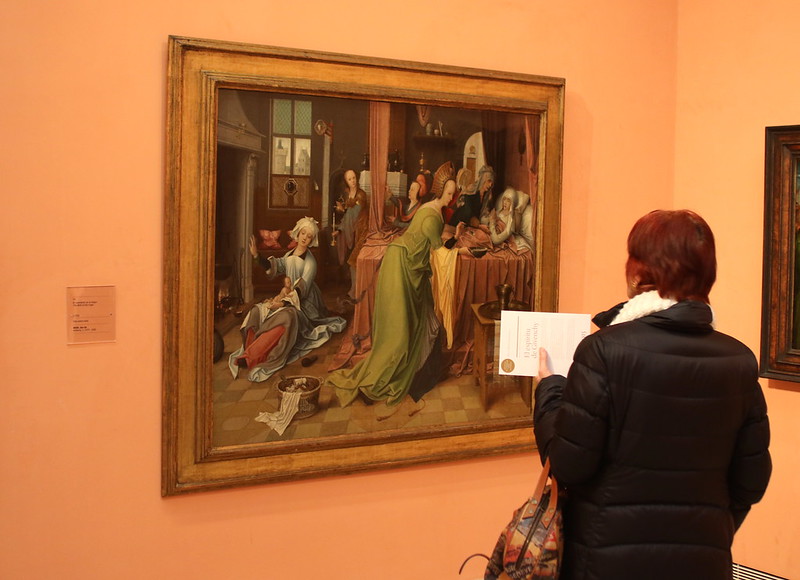 There is another work by Jan de Beer in the the Thyssen-Bornemisza Museum, called Annunciation:

The museum describes these two works as a part of one larger ensemble; I think it’s bit far-fetched and too literate (here is St.Mary, and there is St.Mary – voila!)  Judging by the manner of painting, and assuming they are still by one master, we can safely assume that there are at least few years between these two works (I wrote about similar dynamics of art style in case another Flemish mannerist, Jan Masseys).

There are no mirrors (or mirror-like objects) in this painting, but the bed of Mary is also not shown here in full. There are few other interesting details, though.  The cat and the mouse are nice, sure (although the cat’s face looks more like a pig’s one), but there are also a few objects that bear some relevance to the mirror theme. The vessel on a shelf have interesting reflections; the Archangel’s medallion may consists of a few mini-‘mirrors’; and of course a tray behind the candle next to the bed can also work as a reflector:

Intrigued by all these artifacts in the works by Jan de Beer, I surfed through the web a bit, and collected few more examples.  Unfortunately, this particular Annunciation is only found in black and white:

It is in many ways similar to the previous one (and has many similar characters, the cat, for instance; though I do not see the mouse yet). But we see more of bed here, and therefore can spot, although not so well, few interesting details:

Behind the column, on a table, we see standing a large tray (or a plate); there might be a candle in front of it. But can it be also a mirror?

On the wall above the pillow we see, albeit purely, the same mirror-like object as the one hanging above the head of the St. Anne.

I also found a version of this scene (this time in color):

Here the bedhead is hidden, but we see a large convex mirror right on a wall! It’s in a luxurious gilded frame, again resembling the shape the medallion in the Birth of the Virgin. Wether accidentally or deliberately, but this mirror merges with the staff of the Archangel Gabriel, forming a strange mirror-axe (gently hinting that mirrors can be used as weapons).